A social media campaign, #RightToBreathe, is also being initiated to create awareness on the drive. 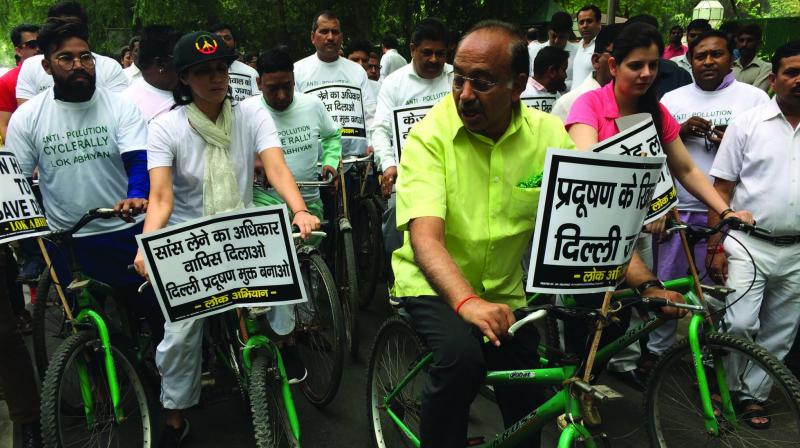 New Delhi: Vijay Goel, Union minister for parliamentary affairs and former Delhi BJP chief, on Thursday led a “cycle rally” in the capital to lodge his protest against Arvind Kejriwal government’s failure to curb the menace of air pollution.

Mr Goel slammed the  government for its inaction in controlling the situation and only engaging in a “war of words” instead of taking constructive steps to save the capital from international shame.

A social media campaign, #RightToBreathe, is also being initiated to create awareness on the drive. He criticised the AAP government for its inaction in controlling the situation

“Be it lack of judicious use of green tax or revamping the public transport system, the Kejriwal government has failed on all fronts and left Delhiites choking,” he said

“Some reports state how youth are facing respiratory diseases due to the air quality. Collection of green tax and not spending it accordingly shows AAP’s lack of seriousness in managing the situation and acting only in the last moment just to highlight itself as a messiah of the masses,” Mr Goel said.

Mr Goel stated that it’s high time that all stakeholders unite and resolve the issue based on facts and Mr Kejriwal needs to come out of his attacking and blame-game model and save Delhi from the already created gas chamber leading to serious health issues.

“It’s time for the public to unite as one and initiate a “Jan Andolan” against pollution and the inaction of Kejriwal government for which the Cycle Yatra is the first step,” he said.

Mr Goel invited RWAs, NGOs, traders, students and others to come forward and join this movement to reclaim the right to breathe and make Delhi better again instead of falling prey to theatrics of AAP.