This new tax regime launched a month back, has faced a lot of criticism nationwide. 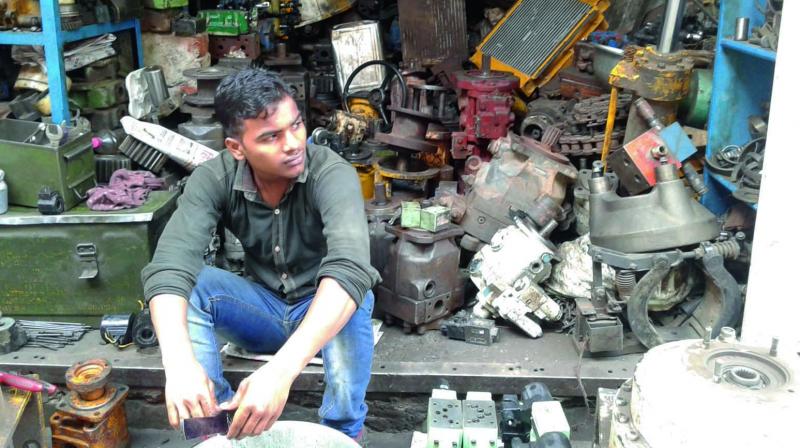 A scrap dealer outside his shop in Khazan Basti.

New Delhi: Khazan Basti, the largest scrap market of Asia, situated in West Mayapuri is facing a dent in profits due to GST. This new tax regime launched a month back, has faced a lot of criticism nationwide.

In order to check the on-ground reality of this new tax structure, this newspaper visited one of the known markets of Delhi that has an annual turnover of Rs 6,000 crore.

There are around 1,000 scrap dealers in this market dealing with spear parts of tractor, gypsies, cranes and ball bearing. According to them, after GST, their profit margin has trickled down.

The owner of Vishnu Tyres said, “Initially we used to buy the scrap material at 4-5 per cent tax but after GST, the percentage has been raised to 18 because of which the market is running in losses.”

Delhi scrap hub, that was earlier situated in Motiya Khan near Sadar Market, was shifted to Mayapuri. Later on, the Delhi Development Authority (DDA) developed this area into an industrial hub.

Ramanuj Singh, a scrap dealer, said that GST is for big businessmen, it is not for small business people like him. “After the GST implementation, small time business owners were unable to source their material. The cost of material was more than its selling price,” he added.

The dealers who are in the business of import are finding it difficult to operate because of increased import duty. Scrap that was imported from China, US and Europe has been either put on hold or the dealers have reduced the quantities.