Many of them extended support to agitating doctors and will have a meeting on Monday to decide future course of action. 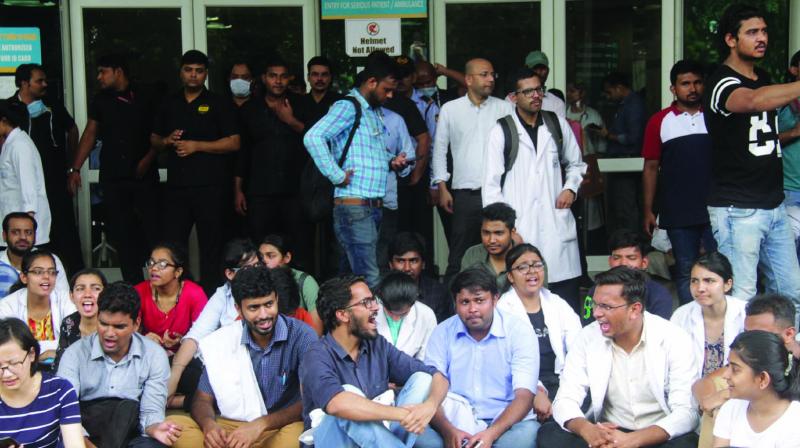 New Delhi: Healthcare services remained affected at several government hospitals in the national capital as resident doctors continued their strike on Saturday against the National Medical Commission (NMC) Bill, even though they resumed work at emergency departments in partial relief to patients.

Additional police forces were deployed outside AIIMS and Safdarjung Hospital in South Delhi as the protesting doctors came out in the streets agitated after authorities threatened punitive action against them on Saturday.

Following the health ministry’s directive, the administration of AIIMS and Safdarjung Hospital issued memoranda to their resident doctors to resume work at their respective departments and warned them of termination of services if they do not join duty immediately.

Emergency services, however, resumed at all Centre-run facilities, and all services at most of Delhi government-run hospitals, including LNJP Hospital and GTB Hospital, in Delhi on Saturday.

Striking doctors from Safdarjung Hospital marched towards the arterial Ring Road after the medical superintendent warned of strict action against them if they failed to resume work. They later returned to the campus and sat on a dharna at the Gate No. 2 of the hospital. The striking doctors of AIIMS protested outside its Gate No. 1.

Meanwhile, several faculty members and HoDs at AIIMS had a meeting and heard the grievances of the students and resident doctors and expressed concern about the bill “passed in a hurry” without taking stakeholders into confidence. Many of them extended support to agitating doctors and will have a meeting on Monday to decide future course of action.

The resident doctors have termed the NMC Bill “anti-poor, anti-student and undemocratic”. The doctors have been boycotting work and demonstrating over certain provisions of the Bill after its passage in Rajya Sabha on Thursday.