With so many foreign dignitaries present in the national capital, the police had to facilitate VVIP movement that led to traffic congestion. 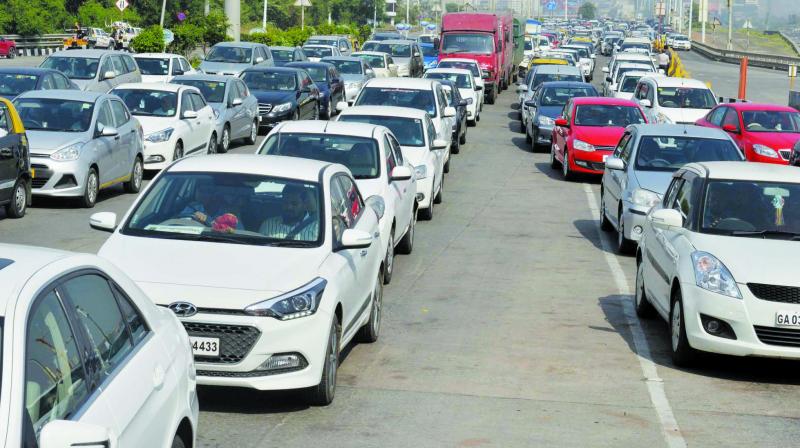 The traffic situation was further worsened by the large number of vehicles on the roads.

New Delhi: Complete chaos was witnessed in Lutyens’ Delhi due to the visiting foreign dignitaries and the heavy footfall at the World Food India festival, which was inaugurated at the India Gate on Friday, with commuters having a hard time reaching their destinations.

The VVIP movement, including the arrival of a large number of delegates at the food festival, choked the roads in Lutyens’ Delhi, affecting vehicular movement on other roads as well, a senior traffic police official said. A number of ambulances too were stuck at the traffic jam.

The traffic congestion was in two spells — one that started at 9.30 am when the VVIPs were travelling to the inaugural function at Vigyan Bhavan and then later at 11 am when the Prime Minister and the VVIP delegates started moving towards India Gate, the police said.

Nearly 3,000-4,000 delegates were present at the inaugural function at Vigyan Bhavan and at the venue of the event at India Gate. The traffic situation was further worsened by the large number of vehicles on the roads.

With so many foreign dignitaries present in the national capital, the police had to facilitate VVIP movement that led to traffic congestion.

There was also a religious function at Gurdwara Rakab Ganj ahead of Gururpurab on Saturday that further led to chaos in Lutyens’ Delhi.

Traffic spilled over to Vikas Marg from Bhairon Marg where a parking space was arranged for the visitors of the food festival. This caused heavy traffic on Vikas Marg from Laxmi Nagar to ITO.

Heavy rush was witnessed at the busy ITO Chowk and traffic towards Old Delhi too was affected. Traffic was seen crawling at many places of the city at Mathura road, Purana Quila Road, Tilak Marg, Copernicus Marg, Ashoka Raod, and Pandara Road.

The roads heading to India Gate, including Kasturba Gandhi Marg, Ashoka Road, Akbar Road, Shahjahan Road, and Zakir Hussain Marg, were also clogged due to barricades put up by the police to divert traffic away from the venue.