2 top cops to be transferred, no coercive action against lawyers. 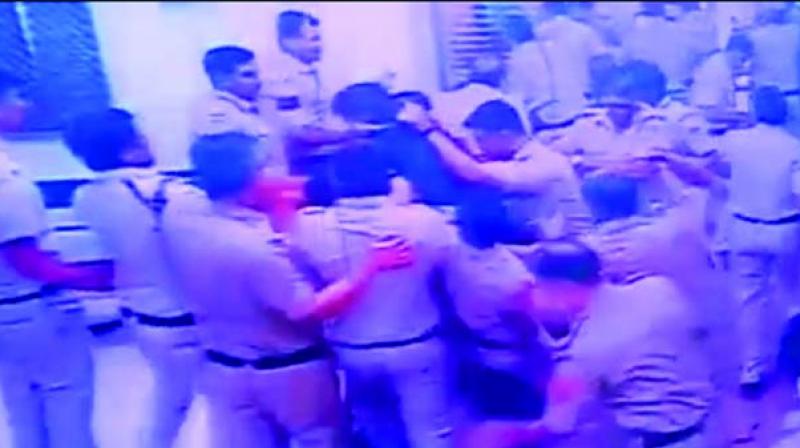 Policemen and lawyers beating each other at Tis Hazari court on Saturday.

New Delhi: A day after a bloody fracas erupted between the Delhi police personnel and lawyers inside the Tis Hazari court complex on Saturday, the Delhi high court has ordered a judicial inquiry under a retired judge who will be assisted by IB, Vigilance, and CBI.

On Sunday, a bench of Chief Justice D.N. Patel and Justice C. Hari Shankar took suo moto cognisance of media reports of the incident and said that former high court judge Justice (retired) S.P. Garg would hold a judicial inquiry into the matter.

It also directed the police commissioner to take immediate action with regard to suspension of assistant sub inspector (ASI) Kanta Prasad, who allegedly dragged an advocate inside the lockup and beat him up, and ASI Pawan, who allegedly fired at the lawyers.

The court directed the Delhi government and the Centre to provide best treatment to the injured lawyers, including those who received gunshot injuries, preferably at AIIMS.

The Delhi government was also directed by the court to provide lump sum ex-gratia of Rs 50,000, 25,000, and 10,000 to advocates Vijay Verma, Ranjit Malik, and Pankaj Dubey—who received gunshot injuries—respectively.

During the hearing, the Delhi police told the bench that a special investigation team (SIT) of the Crime Branch has been formed to look into the clash and probe the matter. It said that six FIRs have been lodged in connection with the incident under relevant sections, including charges of attempt to murder.

“Two cases have been registered against police personnel based on the complaint of two advocates, including a woman, on the charge of attempt to murder, voluntarily causing hurt, wrongful confinement, criminal intimidation, theft, and use of criminal force on woman with intent to outrage her modesty.

“Another case was filed based on the complaint of a police constable, who was injured in the incident, on the charge of obstructing public servant in discharge of public functions, assault, attempt to murder, rioting and robbery,” said the police.

Advocate Rahul Mehra, representing the Delhi police, told the bench that one ASI has been suspended and another transferred for alleged involvement in the clash. He said that 21 police officials and eight advocates were injured in the clash.

Registrar general (RG) Dinesh Kumar Sharma said a closed-door meeting was held on Sunday morning by the chief justice and senior most judges of the high court.

“The meeting was also attended by senior police officers and additional chief secretary of the Delhi government. After the meeting, the court decided to hold a hearing at 1.00 pm. During the hearing, the high court issued notices and sought the responses of the Centre, the Delhi police commissioner, and the chief secretary on the clash between lawyers and police.

“It also asked the police officers, who were allegedly involved in the clashes, to be present in the court at 3.00 pm,” said Mr Sharma.

Separately, the Bar Council of India has written a letter to the high court seeking a direction to the Delhi lieutenant-governor and other authorities to lodge an FIR under Section 307 (attempt to murder) and other relevant provisions of the Arms Act against the police officials.

The letter also sought immediate arrest of the responsible police officials and initiation of a judicial enquiry by a retired Supreme Court or high court judge.