Most vehicles are modified and hence fail fitness tests. 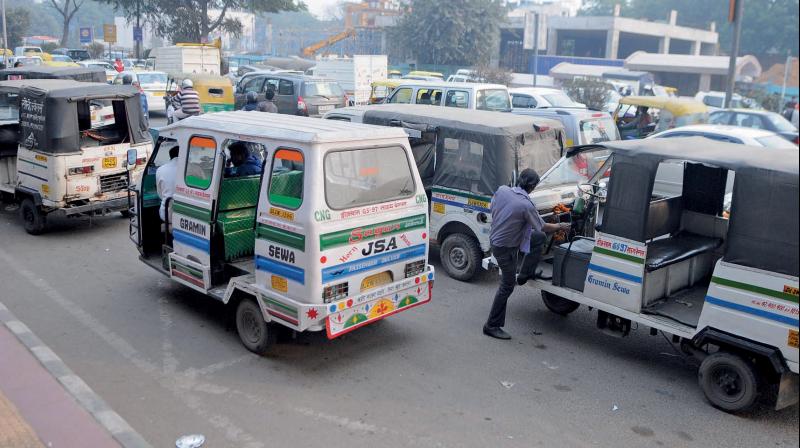 New Delhi: Initially started to provide last-mile connectivity to rural areas, the Gramin Sewa vehicles are rampantly plying on the major road stretches of the city, compromising the safety of the passengers as well as the road users. The drivers of these vehicles complained that the lack of passengers in the rural areas, JJ clusters and resettlement colonies has forced them to take to the major road stretches for their livelihood.

Traffic police officials said that these vehicles frequently flout the routes allocated to them. A majority of the Gramin Sewa vehicles are modified and hence fail fitness tests. These vehicles are often seen without basic requirements like proper head and taillights. They carry more passengers than the permissible limit, thereby jeopardising the safety of the passengers.

The commuters complained that while the areas such as Bawana, Narela, and the interior parts of Najafgarh and Dwarka areas continue to suffer due to the lack of any end-mile connectivity option, these vehicles have increasingly marked their presence near Saket Metro station, Vishwa Vidyalaya Metro Station, Mukherjee Nagar, and other areas. “The interior areas do not give us many passengers, so we have to change our routes accordingly,” a driver said.

Thousands of three-wheelers and similar other vehicles with seating capacity of six passengers, besides the driver, were permitted by the city government to ply in the rural areas, unauthorised resettlement colonies, and JJ clusters of Delhi under its para transit scheme.

The scheme was launched for only new motor vehicles, including high capacity three-wheelers and similar other vehicles with company-fitted bodies duly approved by the Automotive Research Association of India (ARAI) or any other agency as approved by the government of India.

The vehicles are also stipulated to run on clean fuel and be fitted with Global Positioning System (GPS). However, most of these are modified old vehicles without any GPS system, said a traffic police official.

Officials with the transport department said that efforts are being made to streamline the service.