The court passed the order after the petitioners said they would move a representation before FSSAI to show that their method was hygienic. 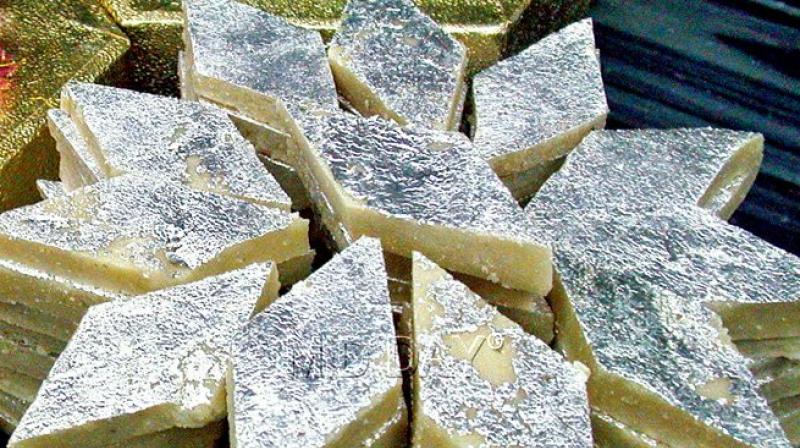 The traditional method of manufacture involves hammering silver into a thin shape while it is placed inside the intestine of a cow or buffalo. (Photo: PTI | Representational)

New Delhi: The Delhi High Court has lifted its stay order on the AAP government's decision to prohibit the use of animal-origin material in the manufacture of silver leaf, known as 'chandi ka warq', used as a decoration on sweets.

A bench of justices Sanjiv Khanna and Chander Shekhar, however, permitted the traditional manufacturers of silver leaf to dispose of their existing stock of the sweet decorative which is also used in Unani and Ayurvedic medicines.

The Delhi government had issued a circular banning the use of the material made by the traditional process on the basis of a central notification to that effect.

The court passed the order after the petitioners, who were in the business of making 'chandi ka warq' by the traditional process, said they would move a representation before the Food Safety and Standards Authority of India (FSSAI) to show that their method was hygienic and without any risk of contamination.

The traditional method of manufacture involves hammering silver into a thin shape while it is placed inside the intestine of a cow or buffalo.

The FSSAI had also told the court that there was a new method of manufacturing 'chandi ka warq' that involved beating sheets of black specially treated paper and polyester sheets coated with food-grade calcium powder.

The petitioners had, on the other hand, contended that their method was not unhygienic as the animal skin was dried and processed to make it hygienic.

While asking the petitioners to make a representation before the FSSAI, the bench expressed hope that the authority would take a decision and communicate it within three months of receiving the representation.