The AAP, however, said it will try to ascertain whether Kapil had any connection with the party. 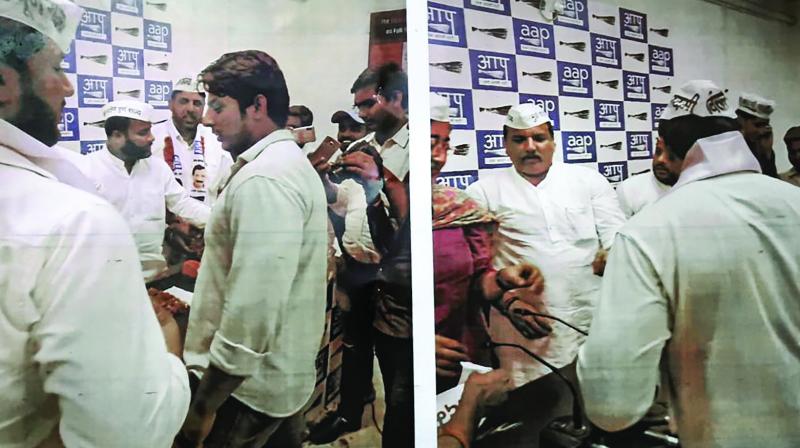 Kapil Gujjar with AAP leaders in an undated photo.

NEW DELHI: Shaheen Bagh shooter Kapil Gujjar has reportedly admitted to the Delhi Police that he joined Aam Aadmi Party in early 2019. The revelation has been made by the Crime Branch of Delhi that is interrogating Kapil who fired shots at Shaheen Bagh earlier this week.

The AAP, however, said it will try to ascertain whether Kapil had any connection with the party. AAP Rajya Sabha MP Sanjay Singh said: “There is no point in releasing such photographs. This is part of BJP’s dirty politics. Crime should be investigated and stern action should be taken against the culprit.”

Mr Singh said that his party will also move the Election Commission seeking action against deputy commissioner of police (Crime Branch) Rajesh Deo for naming AAP in the matter. “When elections are on cards, how can the DCP malign the name of any party,” he added.

The disclosure by the police about Kapil’s alleged links with AAP comes just four days before the Assembly elections in Delhi, in which the 50-day protest at Shaheen Bagh against the contentious Citizenship Amendment Act has become a key issue.

Reacting to the this, BJP chief J.P. Nadda said: “The country and Delhi today saw the dirty side of the Aam Aadmi Party. Kejriwal and his people sold the country’s security for political ambitions. In the past, Kejriwal used to insult the Army and support terrorists but today his relation with a person linked to terror activities got revealed”.

Late in the evening, Union minister Prakash Javadekar criticised the AAP for allegedly playing “politics of violence” to “divide” the society. “Now, it is clear that the person who fired was from AAP. They are creating tension in the city. They stand totally exposed.”

Mr Deo said that Kapil has revealed  that his father Gaje Singh was also an AAP member and that both of them had joined the party in 2019. Kapil’s father had earlier contested the MCD election in 2012 on a BSP ticket.

In the photos, circulating in the media, Kapil can be seen with senior leaders of the party like Sanjay Singh and Aatishi along with his supporters. A senior police officer said that the Crime Branch has also told the court about Kapil and his father’s connection with the AAP.

Kapil had fired two or three times in the air, standing near the spot where hundreds of women and children were sitting in Shaheen Bagh on February 1. A big crowd of unarmed men, women and children were standing nearby. Eyewitnesses said when his gun jammed, he tried to run but was caught. While being led away, he was heard saying: “Humare desh mein sirf Hinduon ki chalegi aur kisi ki nahi (in our country only Hindus will prevail).” He was later taken in police custody for two days for questioning.