Metro users advised not to sit in coach junction area

The DMRC operations are governed by rules and regulations based on Metro Railway (Operations and Maintenance) Act. 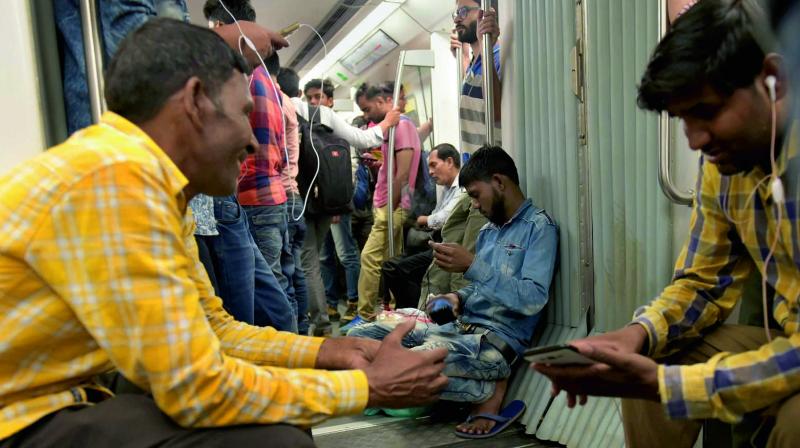 New Delhi: Next time you choose to sit or lean in a coach junction area in a Delhi Metro carriage, think again for the Delhi Metro Rail Corporation (DMRC) has introduced a new advisory according to which such behaviour is not in line with public etiquette.

Top officials said the advisory has been officially incorporated recently and signages to that effect have already been put up in some of the coaches to begin with.

“We decided to introduce this new advisory, based on the feedback we received from our staff. It was found that many commuters sat in the coach junction area or put their foot up to lean onto its body (corrugated rubber), making it dirty in the process,” a senior DMRC official said.

He said the new signage seeks to bring awareness among the Metro riders to not use the junction area as it causes inconvenience to fellow commuters.

“Besides the cleanliness issue, the people sitting or standing at the coach junction areas obstruct the path of other commuters. So, it is not in line with public etiquette,” the senior official said. The DMRC has put up the new signage in “our new rolling stock to begin with”.

“Slowly, we will introduce those stickers (signage) inside the carriages of old rolling stocks too, such as the Yellow and Blue Lines,” he added.

He made it clear that advisories are issued for public convenience, and aren’t a punishable offence, unlike spitting anywhere in the Metro premises, which attracts a monetary punishment.

The DMRC operations are governed by rules and regulations based on Metro Railway (Operations and Maintenance) Act.The Offences and Penalties section of the Act, include drunkenness or nuisance in Metro premises, penalties for carrying offensive material, defacing property, counterfeiting tickets, and endangering Metro passengers’ safety by rash or negligent act or omission.

“The coaches carry signages of Don’t eat inside a carriage, Don’t sit on the floor’ but many people still don’t follow it. We expect commuters to display public etiquette and want to ensure no one is inconvenienced,” he said.