‘Death penalty cold-blooded killing in the name of justice’. 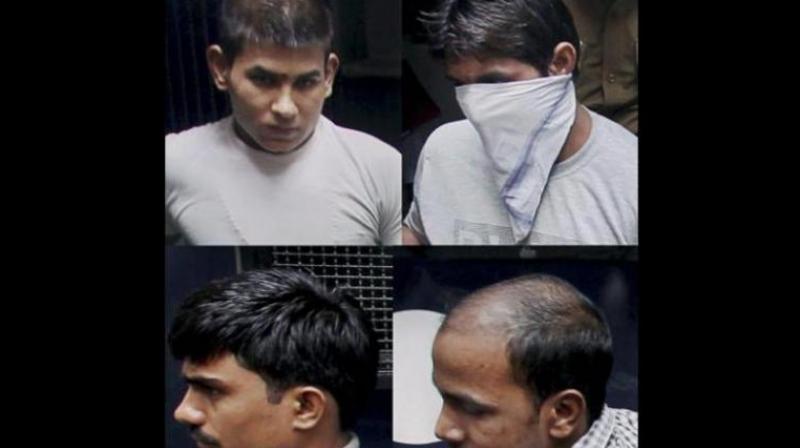 New Delhi: Two of the four Nirbhaya killers, who are facing death sentence in the December 2012 gangrape incident, pleaded for mercy and urged the Supreme Court to commute their capital punishment into one of life imprisonment.

A bench of Chief Justice Dipak Misra and Justices R. Banumathi and Ashok Bhushan reserved verdict on the review pleas filed by three of the four convicts — Mukesh, Vinay Kumar, and Pawan Kumar. The fourth convict, Akshay, is yet to file any review of the May 2017 judgment confirming death sentence to the accused. The court had concluded arguments advanced on behalf of Mukesh in December 2017. The court had earlier stayed their execution pending disposal of review petitions.

On Friday, counsel A.P. Singh, appearing for Vinay Kumar and Pawan Kumar, submitted that the two petitioners are very young and hail from poor families. He said that the capital punishment confirmed by the apex court must be reviewed. The counsel argued that death penalty has been abolished in most of the countries and that it is a cold-blooded killing in the name of justice.

Seeking mercy, the counsel argued that execution kills only the criminals and not the crime. He also brought to the notice of the court that the two accused were juveniles when they were arrested. The counsel argued that the convicts are not habitual offenders and have no criminal records. He said that the court must allow them to be reformed. He also told the court that a lot of discrepancies were found in the three dying declarations of the victim and that Nirbhaya didn’t name the accused at all.

When the counsel sought four weeks’ time to file the review in respect of accused Akshay, the court said that already sufficient time had been granted and no further time will be allowed.

Countering the arguments, senior counsel Sidharth Luthra, appearing for the Delhi government, pointed out that all these submissions were already made during the appeals, which had been rejected.

He also said that two of the convicts were not juveniles and the trial court confirmed this.

The apex court, in its May 2017 judgment, had described the gang rape as a ‘tsunamic shock.’  It said in the instant case, the brutal, barbaric, and diabolic nature of the crime is evincible from the acts committed by the accused persons. It also said that the nature and manner of the crime devastated social trust.

The 23-year-old para-medical student, who had gone with her friend to watch a film, was brutally assaulted and raped by six persons in a moving bus in South Delhi and thrown out of the vehicle with her male friend on the night of December 16, 2012.