Most women said that they feel safe while commuting in public transport rather than in cabs and taxis. 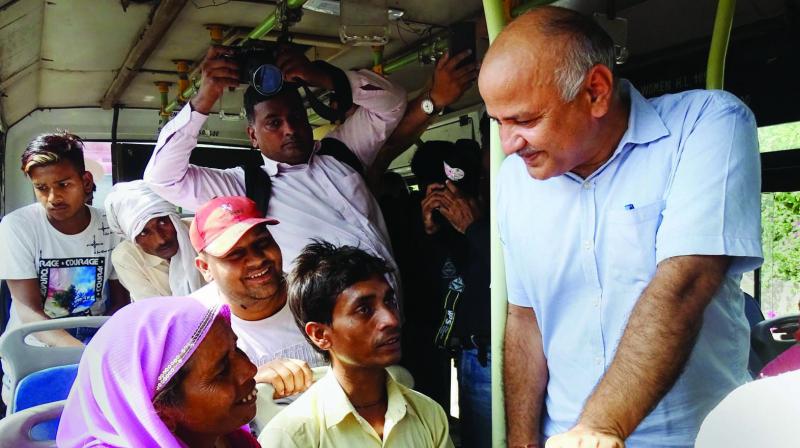 New Delhi: Deputy chief minister Manish Sisodia took a bus ride, on Tuesday, to get feedback from passengers about Delhi government’s proposed free ride for women in public transport. He said he did not find “even one citizen who opposed the idea.”

Most women said that they feel safe while commuting in public transport rather than in cabs and taxis.

Anubhuti, a student of Maharaja Agrasen College, told the deputy chief minister that it was a “very good step” towards women’s safety in the national capital.

“I have to shell out Rs 1,000 every month on a bus pass. Public transport is better in terms of safety. We feel safe while using public transport,” she said.

Another passenger, Gayatri, said she cannot afford commuting in Metro trains so she uses buses.

“There will be free ride for women (in Metro). I will feel safer in Metro trains,” she said.

Mr Sisodia said he spoke to more than 50 women and several men in buses, seeking to know what they feel about the proposal announced by chief minister Arvind Kejriwal on Monday. “I spoke with more than 50 women & many men in DTC buses to understand what they feel about # Free MetroFor Women? Not even one citizen said that it’s a bad idea. On the contrary, everybody said public transport is more secure for women & it would save them 2-3K rupees per month (sic),” Mr Sisodia tweeted.

Mr Sisodia de-boarded at the UPSC bus stand, where he spoke to some women for their feedback. “I have never travelled in a Metro train. But once the decision is implemented, I will do,” Bhagwati, a resident of Najafgarh, told Mr Sisodia.

Anita, a resident of Dwarka, said that commuting in Metro trains costs her much.

“I shell out `100 every day on commute. I will save more in buses,” she said. Earlier in the day, Mr Sisodia alleged that BJP does not want the scheme to be implemented.

“Bharatiya Janata Party leaders are misleading people on this issue. They do not want this scheme to be implemented. I want to ask why it is doing this?” he asked.

Mr Sisodia also said that the AAP government had been working on this proposal for the last two-three months.