However, despite several orders by the National Green Tribunal (NGT), no concrete steps have been taken by the authorities 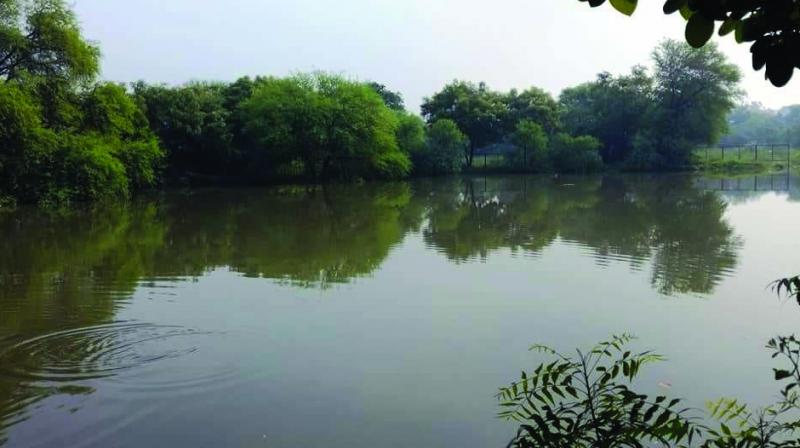 One of the two ponds revived by Dwarka residents

New Delhi: In the face of government apathy towards reviving water bodies in Delhi, locals and volunteers in the parched Dwarka area have successfully revived two such ponds recently.

While the area in Southwest Delhi was one of the first to receive government attention in its plan to revive water bodies in the national capital, very little or no progress has been made so far from its side.

Even as the government and civic bodies are apathetic to the poor state of water bodies in the city, a group of volunteers, led by water activist Diwan Singh, were successful in reviving two water bodies at Dwarka’s Sector 20 and 23 on their own, without any help or support from the government.

“Reviving a water body is actually easy in Delhi but no authority is interested in doing it. The Delhi Jal Board (DJB) took up the task for six months but left it in between. The work on various water bodies, including these two in Dwarka, actually started six years ago. But since we have no resources, it took a lot of time,” said Mr Singh. The ponds received rainwater from storm water drains and the community worked towards reviving it and made sure these survive till the next monsoon.

“We have put sufficient water into the two now. The work was to be done in one month but it took a longer since we didn’t have resources. Firstly, we don’t have any mandate to work on these since it’s on government or DDA land. Then, there is always a shortage of funds and time. We have to act like a task force during the monsoon season to revive this. Sometimes, we could not get any labour and we had to do everything ourselves,” said Mr Singh.

Areas like Dwarka face a perennial problem of water shortage and groundwater is fast running out.

“Revival of such water bodies can go a long way in recharging the groundwater and meeting an area’s water needs. They are a boon for water conservation,” he added.

However, despite several orders by the National Green Tribunal (NGT), no concrete steps have been taken by the authorities

The NGT, in May this year, had directed the Delhi government and the civic bodies to restore expeditiously all water bodies in the city and ensure that these remain clean and not become a waste-dumping yard.

He rued that the South Delhi Municipal Corporation (SDMC) recently claimed to have revived a water body in Sector 3 at a cost of `2.5 crore. However, there is no water in it currently.