The lawyers held a protest at all district courts in Delhi on Monday. 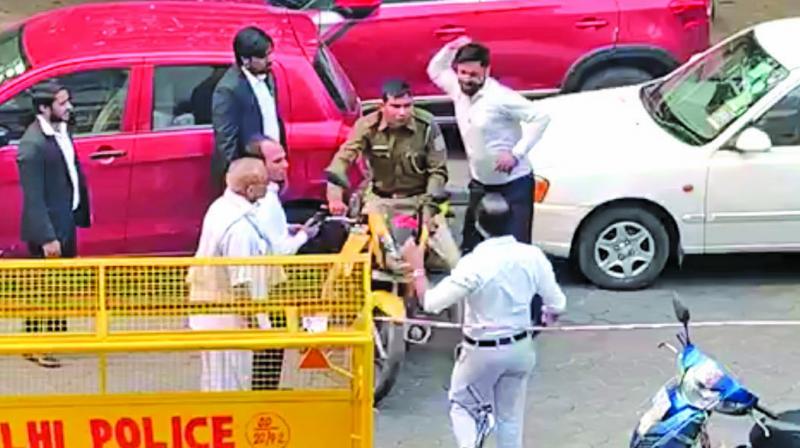 Screen grab of the video showing the lawyer thrashing a policeman.

New Delhi: The ongoing tussle between lawyers and the Delhi police has gone beyond the Tis Hazari court complex and has engulfed the Karkardooma and Saket court. The wrath of the unruly lawyers was faced not only by a Delhi police personnel but also by common citizens who were thrashed mercilessly by the lawyers. The lawyers held a protest at all district courts in Delhi on Monday.

The lawyers, on Monday, abstained from judicial work to mark their protest against the Delhi police. The roads were also blocked for few hours at Saket and Karkardooma court leading to traffic snarls. Several videos of lawyers manhandling police personnel and passersby can be seen on social media. The present case is an extension of the scuffle that is ongoing between lawyers and policemen since Saturday.

A scuffle broke out between lawyers and Delhi police personnel over a parking issue in the Tis Hazari court complex on Saturday in which 21 vehicles including police control room (PCR) vans and prison vans and 12 private bikes were set on fire and vandalised by lawyers.

Around 20 police personnel, including the additional DCP of North district, sustained injuries in the incident. The agitated lawyers also burned the prison locker room and generator room in the court complex. The court made it clear that no coercive action would be taken against any lawyer.

The Delhi High Court also on Monday postponed elections of the bar associations at Tis Hazari and Karkardooma district courts . The Bar council of India issued a statement asking the lawyers in Delhi to maintain peace and harmony as some people are trying to malign the image of the bar.

“We appeal that the legal fraternity resume their work from Tuesday and not resort to any action that can tarnish the image and could ultimately lead to losing the sympathy of courts and common people,” the statement said.