The Viceregal Lodge Estate houses the office of the DU vice-chancellor. 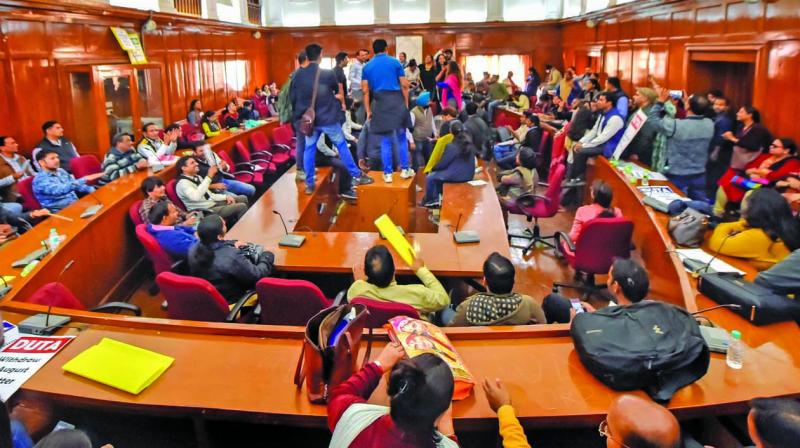 NEW DELHI: Protesting against a circular mandating appointment of guest teachers on permanent posts, the Delhi University teachers on Wednesday entered a building housing the vice-chancellor’s office after breaking three gates and allegedly painted graffiti on the historic structure.

The Viceregal Lodge Estate houses the office of the DU vice-chancellor. Almost 5,000 teachers, cutting across party lines, gheraoed the building, and then entered its premises by breaking three gates leading to the office.

The walls of the building were painted with slogans “End slavery and humiliation”, “Our right, Absorption”, “#VC down”, allegedly by teachers who have occupied the V-C office. According to a teacher, when they reached the office, the V-C was not present and some of his staff members were there, who also left when the teachers entered the building.

Further, the Jawaharlal Nehru University Teachers’ Association (JNUTA) on Wednesday launched a day-long hunger strike over the issue of the hostel fee hike. The JNUTA said the university was going through a major crisis and accused the administration and the HRD ministry of not making any serious effort to address the concerns of the students and the teachers. JNU students have been on a strike for more than a month now over the hostel fee hike issue.