“The baby was still born and the mother suffered an arrest after which she was kept on life support,” said Mr Kajla. 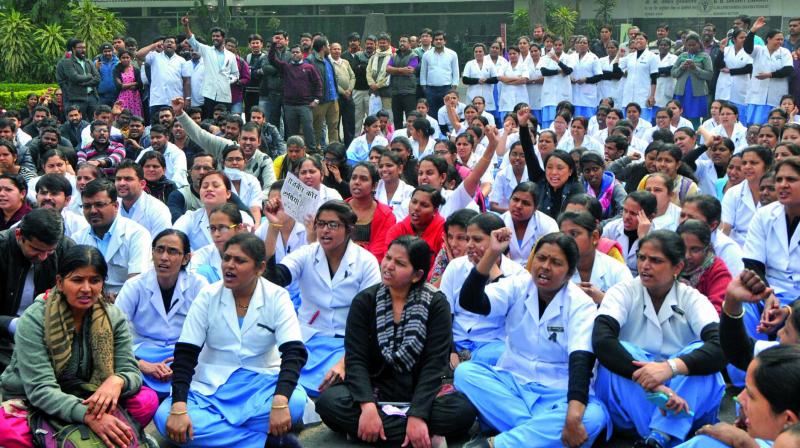 AIIMS nurses protest on Sunday after the death of a colleague due to medical negligence. (Photo: Asian Age)

New Delhi: AIIMS administration suspended five doctors after over 500 nurses went on a strike on Sunday, protesting the death of a colleague due to medical negligence.

The strike affected services in some wards. According to Harish Kumar Kajla, the president of All-India Institute of Medical Sciences (AIIMS) nursing union, their colleague Rajbir Kaur, who was pregnant, was admitted in the hospital for normal delivery on January 16. However, during the process, she lost her baby and had a cardiac arrest.

“During the normal delivery process, the heartbeat of the baby dropped and she was taken to the operation theatre.”

“The baby was still born and the mother suffered an arrest after which she was kept on life support,” said Mr Kajla.

He added, “It all happened due to the doctors’ negligence. They declared her dead last night knowing that next day is a Sunday and not many people will be around.”

Following the protest, the AIIMS administration has suspended five doctors who were involved in the operation. An eight-member committee was constituted to probe the incident and the doctors will be suspended till the enquiry is complete.

“They called us for a meeting Sunday afternoon and told us about their decision,” said Mr Kajla.

However, the Resident Doctors Association (RDA) has condemned the action and has urged the administration to withdraw the suspension order immediately, “failing which, the residents will be forced to withhold all patient care with immediate effect”.