Priyanka Gandhi Vadra hit out at BJP leaders saying their character can be defined by the kind of slogans they raise. 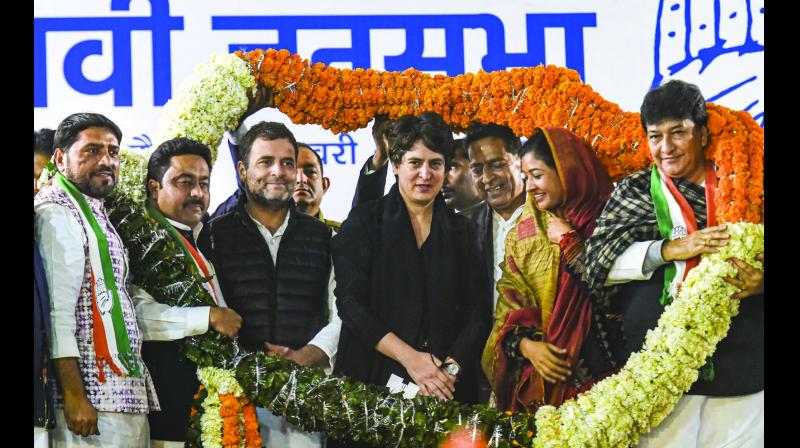 New Delhi: Training his guns at the BJP and the AAP, Congress leader Rahul Gandhi on Wednesday said the politics of Prime Minister Narendra Modi and Delhi Chief Minister Arvind Kejriwal revolved around hate, and their only strategy was to divide people. Addressing a rally in east Delhi’s Kondli ahead of the February 8 Assembly polls, Gandhi said it was the Congress’s 15-year tenure (1998-2013) in the national capital that gave the city its modern infrastructure such as the metro service.

“The politics of Prime Minister Narendra Modi and Arvind Kejriwal revolves around hatred. The only funda (strategy) of Modi and Kejriwal is to divide people,” he said. At another rally in Chandni Chowk, Gandhi said the biggest fear of the youth today is unemployment.

“He (Modi) takes advantage of that fear. He does not want the youth to get employment because that acts as oxygen for his politics,” Gandhi said.  Recalling the Congress rule under Sheila Dikshit, he said the late three-time chief minister never complained or gave excuses as Kejriwal.

Priyanka Gandhi Vadra hit out at BJP leaders saying their character can be defined by the kind of slogans they raise. She accused the Aam Aadmi Party of “modelling” on former Delhi chief minister Sheila Dikshit’s development model. “Their slogans tell their character. Ye desh jodne wale nare hain? (Are these slogans in favour of bringing the country together),” she said at a poll rally in Chandni Chowk.