A substantial part of the health Budget last year was spent on opening these clinics. 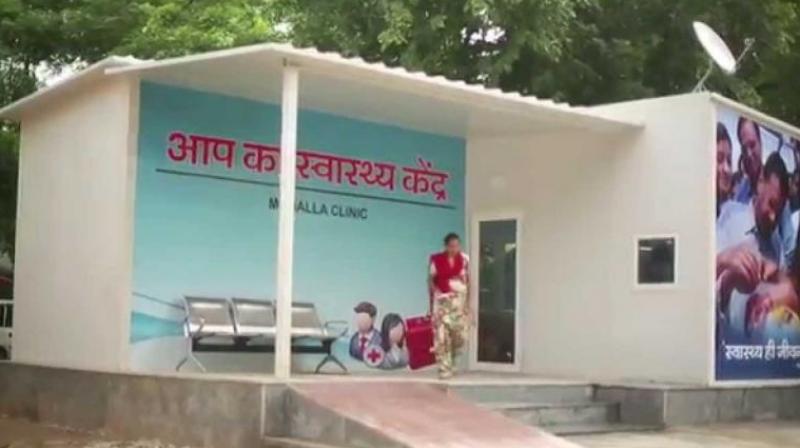 The Delhi government has till now opened 110 such clinics — 103 running in rented rooms and are “temporary” in nature and seven permanent in porta cabins. (Photo: Youtube screengrab)

New Delhi: At the mohalla clinic in Trilokpuri, Savitri Devi is waiting for her turn with her 13-year-old son, who has a nagging cold. Usually, Devi relies on over-the-counter medicines for minor health problems. But this time, help is at hand, she says.

“Earlier, I used to give him (her son) regular medicines for cough or cold. But since the mohalla clinic facility is available now, I bring him here for all kinds of health problems,” she said.

Devi’s comment sums up the objective behind opening such neighbourhood clinics. The pet project of Aam Aadmi Party (AAP) government is aimed at providing basic healthcare facilities and take diagnostics to people’s doorsteps. While the government has missed its target of setting up 1,000 clinics by 2016, they have become a hit among locals and has been running successfully for the past two years.

Fifty-year-old Suman, who has come to the Trilokpuri clinic, in East Delhi, for pain in her joints, says that it is her first time here.

“I have already visited private clinics, but the pain is still there. Somebody in the locality told me to get it checked here,” she said. Devi, who is standing before her in the queue tells her, “Yahan pakka aaram aayega (you will surely feel better by the treatment here).

People have come here for all kinds of health issues — from headaches and fever to skin rashes. It is already 1 pm, the time for the clinic to close, but the queue seems to only get bigger.

“We usually have to extend the timings because of the rush,” said Yogesh Kumar. Since 8 am till now, the doctor has seen 112 patients in the clinic, which runs out of a rented room.

The Delhi government has till now opened 110 such clinics — 103 running in rented rooms and are “temporary” in nature and seven permanent in porta cabins. A substantial part of the health Budget last year was spent on opening these clinics. And according to senior health officials, a sizeable portion will be allocated to them even this year as well in the upcoming Budget.

Dr Kumar says that the model is here to stay. “There has not been a lean day since the clinic was opened six months ago. It has reduced the burden on tertiary care hospitals. Also, it has put quacks out of business,” the doctor said.

Even while some locals have difference of opinion on how effective the medicines prescribed here are, they don’t criticise the existence of such a clinic in the neighbourhood and describe how it is only a plus.

“Personally speaking, I didn’t get any relief with the medicines given in this clinic. But to have such a facility in one’s own backyard is good. There is a lot of rush at all times here,” said 52-year-old Rekha.

He, however, points out that there is a shortage of manpower. The clinic has a doctor, pharmacist, and a lab technician.

“If one of us goes on leave, there is a crisis. We need more people, especially to manage the patients,” he said.

Other than the mohalla clinics, the last year has seen a number of changes and announcements in the Delhi’s healthcare sector.

From free medicine scheme in all government hospitals to making radiology tests and surgeries at private hospitals for Delhiites, the measures have boosted the healthcare facilities in the national capital.