The copy of the complaint was posted on admissionsnursery.com, an online forum of parent community. 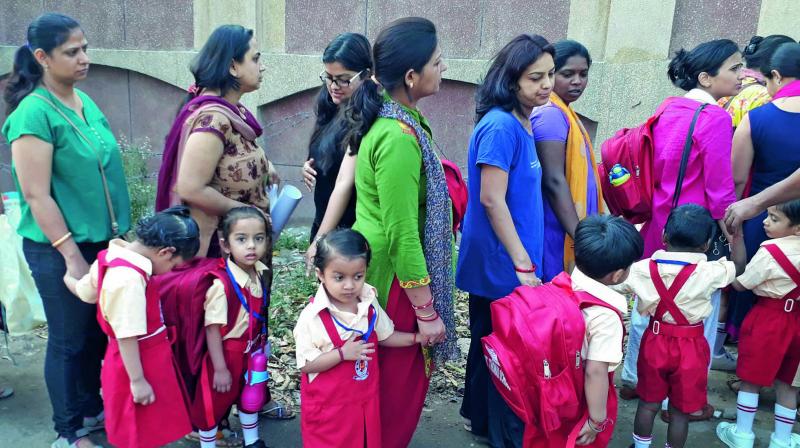 Parents with their kids on the first day of school at St. Thomas School, Indirapuram. (Photo: G.N. Jha)

New Delhi: Hurdles for parents seeking nursery admission for their toddlers in Delhi does not seem to end, as some schools are not refunding them the fees even after DoE clearly directed that schools have to refund the fees within 15 days from the day of withdrawal.

One of the parents has lodged a complaint with the DoE grievance cell stating that she made a payment of Rs 27,950 for her child’s admission to Delhi International School, Sector-13, Rohini, but when she asked for a withdrawal, the school said that the fee is non-refundable.

“I had made the payment on March 9 and made a verbal request for withdrawal on March 17 but the school authorities shot back saying that the fees are non-refundable. I again gave a written request through email on March 21 and 29 but no payment has been refunded as of now,” the complaint filed by Ms Mansi Gulati said.

The copy of the complaint was posted on admissionsnursery.com, an online forum of parent community, after which many other parents claimed to be facing similar situations.

They complained that some schools in West Delhi and Central Delhi are following the non-refunding policy.

As per DoE guidelines, “If any parent, after depositing the full fee for admission of a child, chooses to withdraw the child from the school within one month from the date of admission, the school shall retain the registration charges, admission fee and the tuition fee for one month only, and shall refund all other amounts of fees or other charges within fifteen days of the request made by the parent(s), or guardian(s) to the school under proper receipt.”

According to founder of the forum, Sumit Vohra, some schools in the capital are making a fool of parents by telling them that fee refund policy of current year has not come yet for 2017-18.