Gupta says action must be taken against mischief monger. 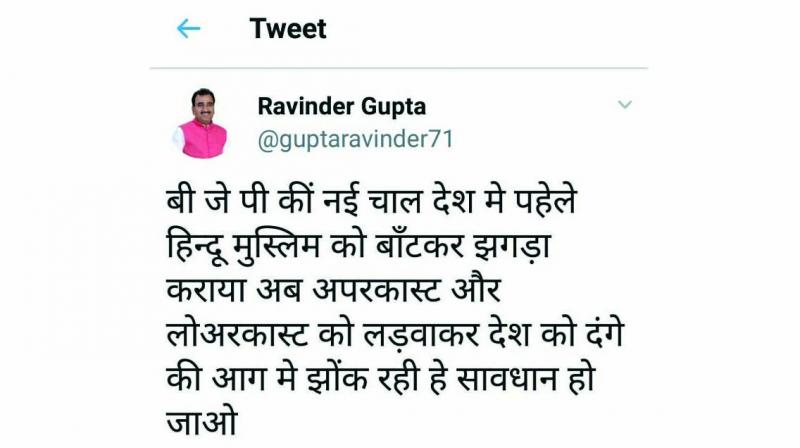 The tweet says that after dividing Hindu and Muslims, the BJP is now creating tension between upper and lower castes among Hindus.

New Delhi: Delhi BJP leadership was left red-faced on Thursday after a tweet surfaced from handle of party general secretary Ravinder Gupta blaming the BJP for communal divide in the country.

The tweet says that after dividing Hindu and Muslims, the BJP is now creating tension between upper and lower castes among Hindus.

Mr Gupta went on to say that the account was hacked on Wednesday evening and filed a police complaint in this regard.

Tweet from Mr Gupta’s personal handle surprised the Delhi BJP leadership and its leaders. Several leaders of the party tried to know the reason behind the damaging tweet.

Within an hour, Delhi BJP spokesperson Harish Khuran tweeted that Mr Gupta’s twitter account was hacked on Wednesday evening. At 10.40 am ,defending Mr Gupta, Delhi BJP vice-president Rajiv Babbar tweeted, “I spoke to Mr Gupta, he said my account has been hacked and some one is misuing my handle.”

Mr Gupta told this newspaper that his Twitter account was hacked and some one was intentionally sending out the damaging tweets in a bid to tarnish his and the party’s reputation.

“I noticed that my account was hacked on Wednesday night. However, my account was later recovered. I will be lodging a police complaint against this mischief,” said Mr Gupta.

At 11.16 am on Thursday, Mr Gupta tweeted, “My hacked twitter account has since been restored. I demand that strict action be taken against the person who has been misusing my account and also my name.”