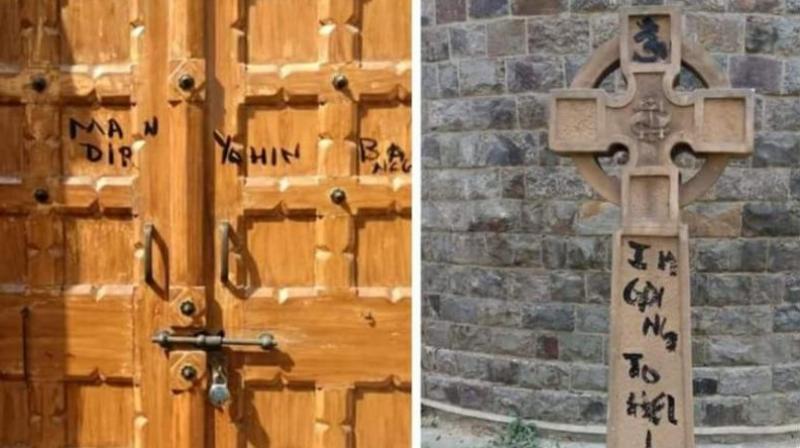 Slogan on the chapel’s door, Om mark on a cross (right)

New Delhi: Controversial quotes were reportedly found written on the door of a chapel at Delhi University’s St Stephen’s College. The student Union president, Sai Aashirwaad, said inflammatory quotes such as ‘Mandir Yahi Banega’ were found written on the chapel’s main door. In addition, an ‘Om’ symbol, along with the words ‘I’m going to hell,’ was found on a cross placed behind the chapel.

Sources said the provocative slogan was first noticed on Friday evening. No one knows who wrote it or for how long it’s been up there as there have been no regular classes owing to the looming exams. They further said the incident might have taken place on Thursday night. However, they do not have any clue about who might have been behind the incident.

The matter came to light after the images showing the vandalism started circulating on social media since Friday afternoon. Since then, the door and the cross have been cleaned up, but some of the words can still be seen inscribed on the door.

In its statement, the National Students’ Union of India (NSUI) condemned the attack and demanded strict action against the perpetrator(s).

“They have tried to polarise the student community on the basis of religion and fake nationalism several times, but have failed in each of their attempst,” it said.

The Akhil Bharatiya Vidyarthi Parishad (ABVP) too voiced its concern against such vandalism in universities. Some students suspect this could be a prank to spread the idea of divisive politics and influence the formative minds of the prestigious college.

The college administration had announced preparatory holidays for students from April 28, with only those having practical exams attending the college.

However, the Delhi police on Saturday dismissed as “rumours” the controversial quotes written on the door of the chapel.

The college administration had announced preparatory holidays for students from April 28, with only those having practical exams attending the college.

The police also said that it did not receive any intimation about the alleged controversial quotes written on the chapel.