Sea of Red in city as farmers rally for rights 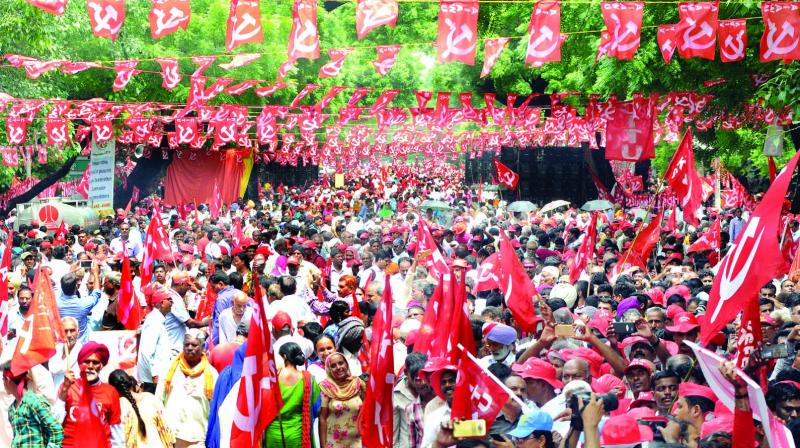 Protesters listen to a speaker during the ‘Mazdoor Kisan Sangharsh Rally’ organised by workers and farmers from various unions at Parliament Street in New Delhi on Wednesday. (Photo: Biplab Banerjee)

New Delhi: The capital witnessed a rare sea of red on Wednesday as lakhs of workers, peasants and scores of marginalised groups rallied for what they called their basic rights, which included Minimum Support Price (MSP) as per the recommendations of the Swaminathan Committee report, minimum wages of Rs 18,000 per month and concrete measures for employment generation.

Braving incessant rains, which had ruined the camp where the workers had been lodged at Ramlila Maidan, the workers and peasants marched towards Parliament in the morning. Organisers said that people came from around 26 states.

Organised by the All India Kisan Mahasabha, Centre of Indian Trade Unions and All India Agricultural Workers Union, the farmers and peasants from across the country were joined by scores of small unions of Anganwadi workers, construction workers, midday meal employees and bank unions. The organisers announced that trade unions would hold a conclave to announce a two-day strike from September 28.

Apart from this, on November 3, a youth march to Parliament would be held which would be supported by peasants and workers and another long march Delhi would be held on November 28-30. Speaking to reporters on the sidelines of the gathering at Jantar Mantar, CPI(M) General Secretary Sitaram Yechury said: “This is the war cry (aakrosh) of people. This government has cheated them. This government has to be removed. Government will not listen to people and that is why we will be intensifying our protests. There will be nationwide strikes. Not a single promise was met by this government. You cannot trust this government. Next week there will be some protest”.

Hannan Mollah, AIKS General Secretary, said: “We want the government to fulfil its promises. Where is the promise on Minimum Support Price (MSP)? Where is loan waiver? For farmers, the Modi raj is the raj of traitors. Without addressing our concerns, you cannot solve the problems of the country. You will not be allowed to rule”.

AIKS president Ashok Dawale said there would be another long march from November 28-30 in Delhi. It will be a march to Parliament. From different parts of Delhi, various farmers organisations will take part in that.

Rally chokes CP, traffic crawls on major roads
Vehicular movement came to a standstill in Lutyens’ Delhi as thousands of farmers and workers took out a protest march on Wednesday, demanding remunerative prices for farm produce as per the Swaminathan Comm-ittee recommendations, loan waiver and a minimum wage of not less than Rs 18,000 a month.

The ‘Mazdoor Kishan Sangharsh Rally’, began from the Ramlila Maidan and culminated at the Parliament Street. The organisers claimed nearly 1.5 lakh people from at least 23 states participated in the march, preparation for which had started several months ago.

The protest threw traffic out of gear in other parts of Delhi as well. Sansad Marg, Janpath and KG Marg were closed for movement of vehicles, leading to congestion on alternate routes, a senior police officer said.

Connaught Place was choked as farmers walked from Ramlila Maidan towards Parliament Street via Ranjeet Singh flyover, which led to traffic congestion on adjoining roads.