NSUI is naming a woman candidate as its presidential candidate has been done for the first time by either ABVP or NSUI since 2011. 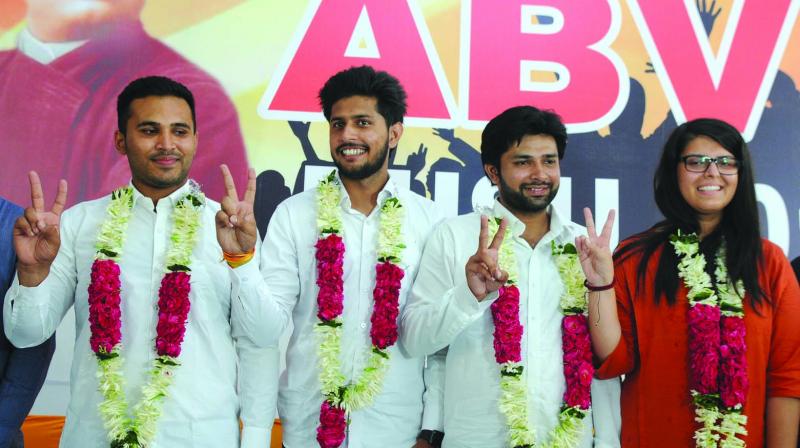 ABVP candidates Akshit Dahiya for president, Pradeep Tanwar for vice-president, Yogit Rathi for secretary and Shivangi Kharwal for Dy secretary during the declaration for the upcoming DUSU polls in New Delhi on Thursday. (Photo: Biplab Banerjee)

New Delhi: The RSS student outfit, ABVP, and Congress backed NSUI declared their candidates for the posts of president, vice president, secretary, and joint secretary for the Dusu elections on September 12.

The ABVP’s panel of candidates for Dusu polls on Thursday promised to work for a “credible, responsible, and student friendly” students’ union besides promising to “challenge” the “anti-national forces” on the campus.

Meanwhile, NSUI said that at a time when BJP is protecting rapists and RSS is promoting misogyny, NSUI is naming a woman candidate as its presidential candidate has been done for the first time by either ABVP or NSUI since 2011.

Mr Dahiya, a medal winner in body building, said that he will ensure a wholesome atmosphere for development of sports activities in DU (Delhi University) so that in the next Olympics students of the varsity win medals for the country.

For the post of vice president, ABVP has fielded Pradeep Tanwar while NSUI’s candidate is dalit student Ankit Bharti.

ABVP’s Yogiit Rathee and NSUI’s Ashish Lamba will be contesting for the post of general secretary and for the post of joint secretary. ABVP has given ticket to Shivangi Kherwal while Abhishek Chaprana is JS candidate for NSUI.

Last year, the ABVP bagged three posts, including that of the president, in the Dusu elections while NSUI won the post of general secretary.