A team of trained snake rescuers from the NGO rushed to the office. 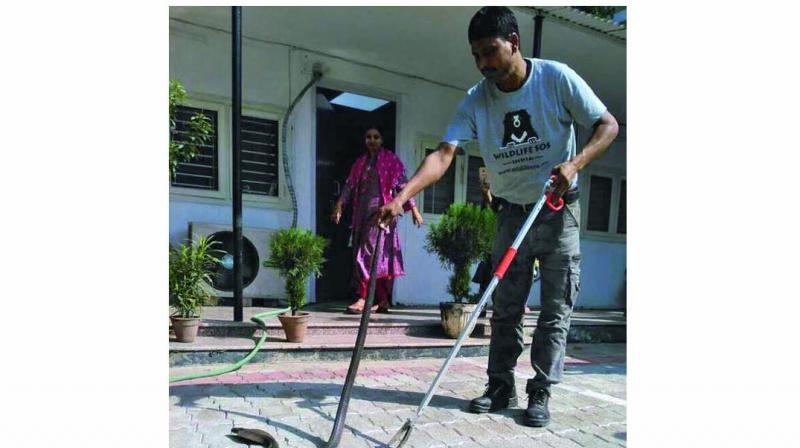 A cobra being rescued by Wildlife SOS worker on Thursday

New Delhi: A nearly five-feet-long cobra was rescued from the Delhi Tourism and Transportation Development Corporation (DTTDC) office, near Dilli Haat in Pitampura, on Thursday.

On catching a glimpse of the large venomous snake coiled up behind a cupboard inside an assistant engineer’s office at the DTTDC office in Pitampura, barely inches away from him, the officer in-charge rushed out to alert NGO Wildlife SOS rapid response unit.

“I was shocked to discover the large cobra inside my office room. As I am familiar with Wildlife SOS and their wildlife rescue hotline, I immediately contacted their team for help,” assistant engineer Deepak Kumar Saxena said.

A team of trained snake rescuers from the NGO rushed to the office.

As the space behind the cupboard was not very wide, it was difficult to catch the snake without alarming it. On sensing, that they were trying to capture it, the cobra flared its hood in an attempt to defend itself.

After ensuring that everyone was at a safe distance from the agitated snake, the team was successful in extricating the cobra and carefully transferred it into a safe transport container. The snake is, at present, under observation and will be released back into the wild once deemed fit.

Kartick Satyanarayan, co-founder of Wildlife SOS said, “Being one of the four most venomous snake species to be found in India, our team had to exercise a lot of caution, while conducting the rescue in order to avoid any unnecessary casualties. We request people not to handle any wild animal or reptile themselves as it can prove to be dangerous, especially in cases involving venomous reptiles.”