Metros   Delhi  06 Nov 2019  Law and order in city was not affected due to protest: Cops
Metros, Delhi

Law and order in city was not affected due to protest: Cops

Most police personnel who participated in stir were off duty. 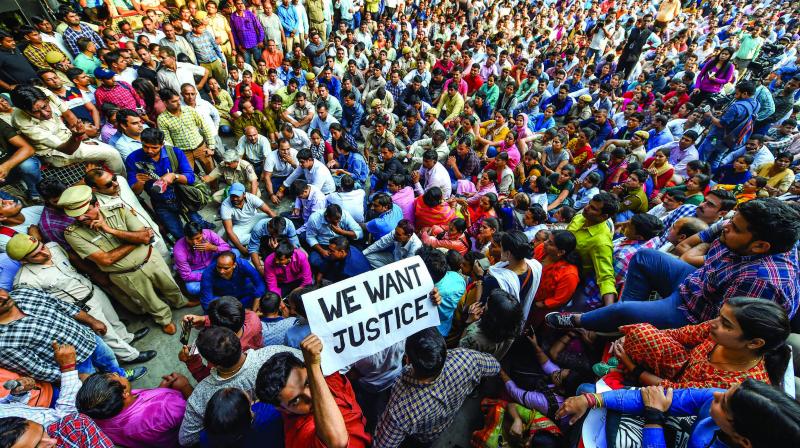 Police personnel gather outside the police headquater at ITO during a protest against the alleged repeated incidents of alleged violence against them by lawyers in New Delhi. on Tuesday. (Photo: PTI)

NEW DELHI: Despite holding an 11-hour protest on Tuesday in the national capital, the police personnel ensured smooth functioning of their respective police stations across the city. The police personnel turned up in shifts outside the police headquarters at ITO to lodge their protest against the lawyers for assaulting their colleagues. They were also protesting against the action taken against their officers and colleagues following a recent clash at Tis Hazari court complex. Most of the cops participated in the protest were off-duty.

Despite the massive protest, the police personnel ensured there was adequate security provided to the VVIPs in the city. “There was no compromise on security at all the vital establishments all across the city,” a senior police officer said. “There was no security lapse reported from any part of the national capital,” he added.

As far as the functioning of the police control rooms was concerned, all its vehicles were on the roads to attended emergency situations. On average, the PCR receives about 10,000 calls every day. “Today, we attended and took action on each call,’’ DCP Sharat Kumar Sinha (PCR) told this newspaper.

With the odd-even scheme in the city, traffic police personnel ensured that violators of the scheme were penalized. “In all, we fined 213 traffic violators all through the day,” joint commissioner of police (traffic) N.S. Bundela said. The traffic police personnel also claimed that they ensured free flow of traffic on a 10 km stretch on which a major religious procession was carried out.

The traffic cops also formed a 31-km green corridor from Gurgaon to Fortis Hospital in New Friends Colony for a heart transplant emergency.