Delhi: 2 lawyers try to kill self, all 6 district courts closed

Delhi Bar Associations members said that litigants were not allowed in the court complex due to security reasons. 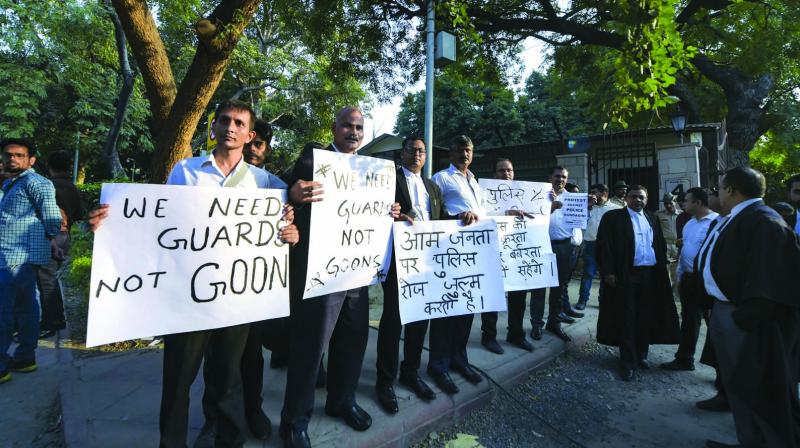 New Delhi: Following the clashes between Delhi police and lawyers in the Tis Hazari court complex on November 2, lawyers in the national capital on Wednesday closed the gates of all six district courts including Saket and Patiala House courts.

In Rohini court, two lawyers allegedly tried to commit suicide on Wednesday as the protest, which was triggered after the clashes between lawyers and Delhi police, entered its third day. Police said that one lawyer doused himself in kerosene and tried to set himself on fire but was stopped by his colleagues while another lawyer climbed a building in the court complex and threatened to jump off it.

After hearing all the parties, the Delhi high court on Wednesday dismissed the review application filed by the ministry of home affairs seeking clarification under the garb of seeking permission to arrest the lawyers.

The high court order stated that the bar and the police establishment represent and constitute, as it were, the preserver, and the protector of the rule of law. They are but the two faces of the coin of justice. “We are hopeful that if a sincere attempt is made in this direction, peace and harmony will ultimately prevail,” the high court stated.

Bar Council of India chairman Manan Kumar Mishra, however, said no incident of violence involving lawyers, the police and the public will be tolerated and action will be taken against the guilty. He also accused policemen of making provocative statements against judges and lawyers during their protests outside the police headquarters.

Litigants were not allowed to enter court complexes across Delhi on Wednesday by the protesting lawyers. The lawyers raised slogans while litigants were standing outside the gates of the courts. Meanwhile, the Bar Council of India (BCI) said that it will withdraw the strike and resume work from Thursday and action will be taken against the guilty lawyers. The Council also demanded the arrest, within seven days, of the Delhi police personnel involved in the scuffle.

Delhi Bar Associations members said that litigants were not allowed in the court complex due to security reasons. “There are no police officials inside. Who will do the security check of the litigants. There may be some criminals among them too,” said advocate Dhir Singh Kasana, general secretary of the coordination committee of all district courts bar associations in Delhi.

One of the protesting lawyers said on the condition of anonymity that they will not resume work till the time the policemen, who had allegedly fired and lathicharged at advocates are not arrested.

Further, a Supreme Court advocate has slapped a legal notice on police commissioner Amulya Patnaik for “not taking action” against the Delhi police personnel who protested in front of the police headquarters at ITO. Meanwhile, Mr Patnaik appealed to the staff to maintain the decorum of the force and perform their duty with atmost sincerity without any provocation.