Tree decking and rock climbing facilities has been created for children interested in adventure. 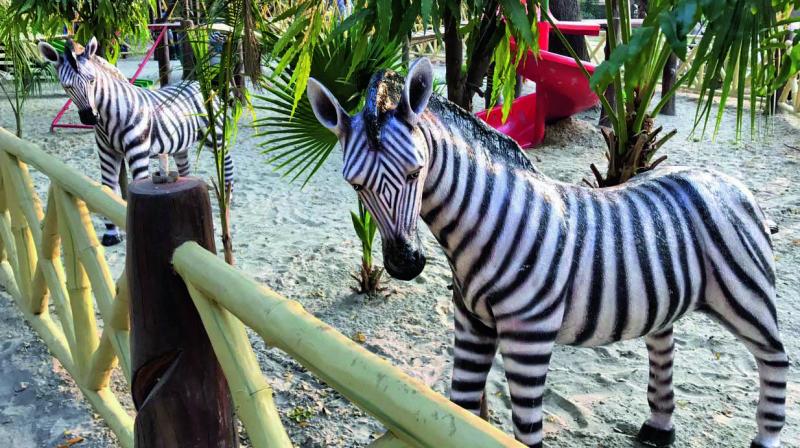 The park has been developed at a nominal cost of Rs 5 lakh.

New Delhi: Before going into the polls, the South Delhi Municipal Corporation (SDMC) has created an amusement park for the children as a parting gift to them. The amusement park developed at the Kamal Cinema Park in Safdarjung area will be officially opened for the public on Thursday. The SDMC has installed life-sized statues of superheroes, cartoon characters, and animals. Tree decking and rock climbing facilities has been created for children interested in adventure.

A first of its kind facility by any civic body in the capital, the “Woodland Adventure Park” has been created on half-an-acre area of the Kamal Cinema Park and will cater to the kids from the nearby residential areas of Safdarjung and Green Park.

The SDMC took six months to implement the idea and now, after its official launch on March 9, the civic body is planning to create around a dozen more such facilities for children in different areas under its jurisdiction.

“It took six months to realise the concept on the ground since it was ideated. After successfully implementing it on ground, the SDMC will build similar facilities in 10 more parks,” said SDMC standing committee chairman Shailendra Singh Monti.

The park has life-sized statues of superheroes like “Batman” and “Superman” and cartoon characters like ‘Chhota Bheem.’ For adventure activities, decks are made around all the trees and they are interconnected with a rope bridge. A wall has been built for rock climbing practice.

The park has been developed at a nominal cost of Rs 5 lakh. Apart from children, facilities have been developed for the parents accompanying them. Benches and open gym have been placed in the park for their use.

“Children upto the age of 12 years can avail the facilities and proper precaution has been taken to ensure their safety,” added Mr Monti.