AAP MLAs close to Mishra back CM over ‘graft’ charge

AAP MLAs Alka Lamba and Somnath Bharti, who are reportedly close to Mr Mishra, trumped up support for the party national convenor. 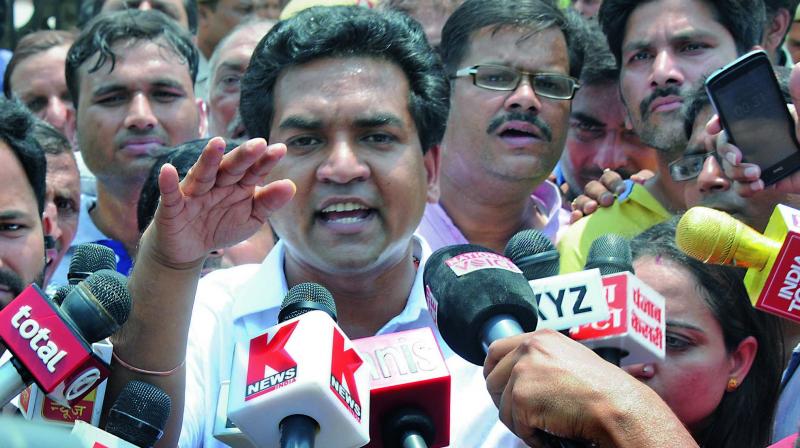 New Delhi: The fissures in the AAP could have possibly cracked wide open after sacked minister Kapil Mishra made a bombshell allegation. But, the AAP MLAs came out in support of Delhi chief minister Kejriwal.

AAP MLAs Alka Lamba and Somnath Bharti, who are reportedly close to Mr Mishra, trumped up support for the party national convenor. Malviya Nagar MLA Mr Bharti said his “baseless” allegations have done nothing more than uniting the party. He claimed that Mr Kejriwal is incorruptible.

Ms Lamba said it was about time that internal rifts be forgotten to put up a “collective fight for the truth”. “Arvind Kerjiwal remains India’s only hope for honest politics. He is spotless & I have full faith in him. These allegations cannot scare us!” Dwarka MLA Adarsh Shastri tweeted.

After allegations against the Delhi chief minister came to light following ex-minister Mr Mishra claim that the leader took bribes from city health minister Satyendar Jain, the Congress’ youth wing protested outside the residence of the chief minister.

Mr Kejriwal’s Civil Lines residence had earlier this month seen protests by its own party workers. Senior AAP leader Kumar Vishwas and suspended AAP’s Okhla MLA Amanatullah Khan were then locked in a bitter fight. Mr Vishwas supported ouster of Mr Khan after he had accused him of hobnobbing with the “BJP-RSS”.

The party has seen a lot of rumbling after a series of electoral defeats. The MLAs were divided in factions when Mr Vishwas, one of the seniormost AAP functionaries, said electronic voting machines (EVMs) “should not be blamed solely” for the party’s debacle in the Delhi civic polls and Punjab Assembly elections.