This year, the city has seen an early fog due to high pollution levels and adverse wind patterns. 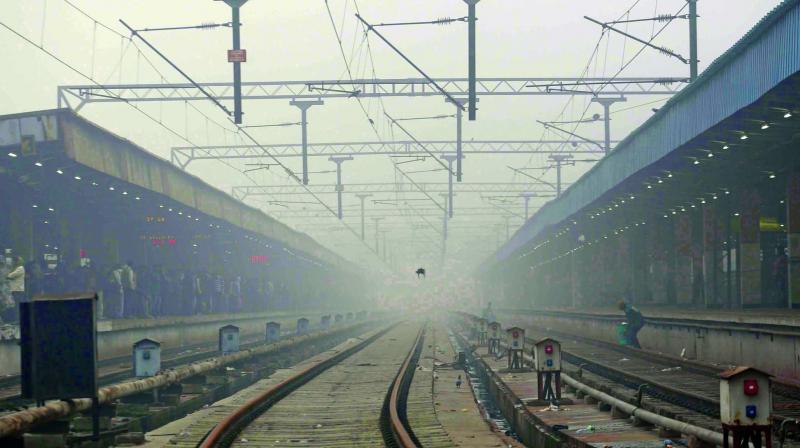 New Delhi: The national capital  woke up to a chilly Wednesday and witnessed a thick, dense blanket of fog, rendering them almost blind as visibility levels were severe, taking a toll on the morning traffic.  Also, the Met has predicted that New Delhi will continue to reel under dense fog this week. At least 38 flights and 81 trains were delayed. This year, the city has seen an early fog due to high pollution levels and adverse wind patterns.

Even though the mainly clear skies prevailed in the national capital throughout Wednesday, dense fog in the morning severely affecting the rail and air traffic. The visibility at Indira Gandhi International (IGI) Airport dipped to below 50 metres between 5 am and 9.30 am, according to the MeT department.

As many as 81 trains were running late by several hours while three train services were cancelled and 12 rescheduled due to heavy fog, a senior railway official said. Flight operations at Delhi airport were also hit due to dense fog with as many as 38 departing flights failing to stick to their schedule time. There was no cancellation or diversion on account of fog at the IGIA during the operations under Low Visibility Procedure (LVP), which was put in place at 23.34 pm yesterday, the DIAL (Delhi International Airport (P) Limited) said. But 24 flights were cancelled and three diverted during LVP due to “other reasons,” the DIAL added.

The average delay at the airport was about two hours, according to the airport authorities. Visibility will drop across the city over the next few days due to dense fog formation, an India Metrological Department (IMD) official said, adding that high pollution levels and moisture content in the air are a perfect recipe for thick fog. The humidity on Wednesday oscillated between 100 and 55 per cent.

The Central Pollution Control Board’s (CPCB) air quality index (24-hour average) was in the “severe” category with a reading of 407. Early on November 30 and December 1, Delhi had experienced dense fog. On an average, Delhi sees 20 days of dense fog between mid-December and mid-February, according to the MeT department.