Jat agitation spills over to Delhi, protest near border

The Jat community in Haryana is demanding reservation in education and government jobs. 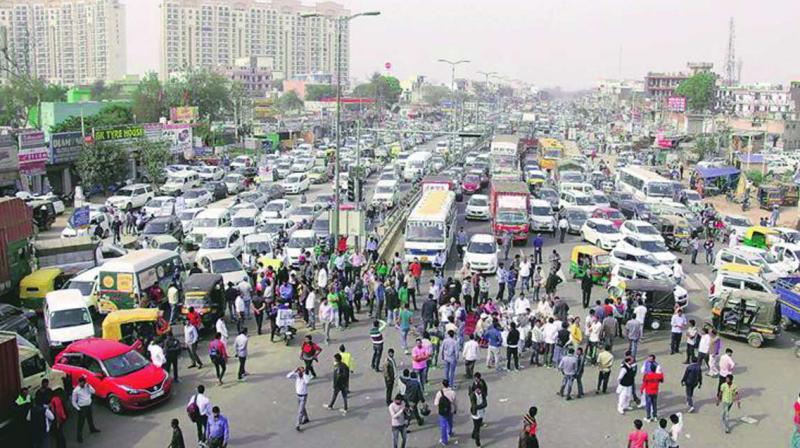 The group had last week announced holding a series of protests in the city’s border areas in support of the quota agitation by Jats in Rohtak. The protests have remained peaceful so far. “We are holding peaceful protest in Delhi in support of reservation for Jats and those agitating in Haryana over the issues,” ABJASS president Yashpal Malik said. The agitators on Wednesday raised slogans and handed over a memorandum addressed to the Prime Minister to the authorities.

According to Mr Malik, similar protests will be held at Loni border on February 12 and Bawana on February 14. The protests by Jats in border areas of the national capital assume significance as the Assembly elections in Uttar Pradesh is around the corner. Over 100 seats in western UP go to polls on February 11 and February 15. The civic polls in Delhi are likely to be held in April.

The demonstrators have demanded that the Centre and the Haryana government release the Jat youth jailed for the violent agitation in Haryana in February 2016, and compensation and jobs to families that lost their members in the agitation. Earlier, the Jats held protests in Narela and Mahipalpur areas in Delhi raising similar demands.

The memorandum addressed to Prime Minister Narendra Mood alleged “injustice and atrocities” against Jats by the Haryana government and sought his intervention for fulfilling the promises made to the community with regard to providing them the benefits of reservation. “We are supporting the demands of Jats to be included in the OBC category and provided reservation benefits. So far, we have adopted peaceful methods expecting that the government will listen to us. The agitation will continue and we will extend support to the community members raising the reservation demand in other states too,” Mr Malik said.