Rajouri a crucial test ahead of civic elections

The constituency is also comprised of 46,000 non-Sikh Punjabis, who are considered to be the traditional vote bank of the BJP. 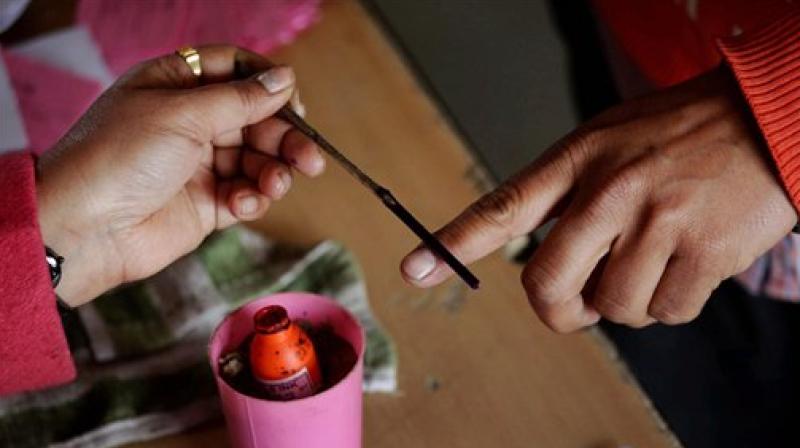 Friday was the last day of campaigning for the bypoll, with the three parties — the BJP, Congress and AAP — trying their best to woo the voters. (Photo: PTI)

New Delhi: Two years after Delhi’s political dynamics underwent a radical shift, the stage is set for the bypoll to Rajouri Garden Assembly seat, where the fate of the AAP, BJP and Congress hangs in the balance. The chief electoral office of Delhi said along with the EVMs, the reliability of which has been questioned by the AAP, voter-verifiable paper audit trail will be used at all the 166 polling stations of the constituency, which goes to poll on Sunday.

The election office has also prescribed an additional measure by way of adding provision for printing the photograph of candidates on the ballot paper to be displayed on the EVMs, said an official statement. The seat fell vacant early this year after AAP’s Jarnail Singh quit as MLA to contest Punjab Assembly poll against SAD patron Parkash Singh Badal, only to lose and considerably dent the AAP’s chances of holding on to the seat.

Friday was the last day of campaigning for the bypoll, with the three parties — the BJP, Congress and AAP — trying their best to woo the voters. Out of the total 56,300 voters in the constit-uency, nearly 2,06,000 are Sikh voters. However, since 1984 the Sikh voters have been opposing the Congress candidate. But, by holding a roadshow in the area on Friday, Delhi Congress chief Ajay Maken has tried to influence voters, the benefits of which might go to Congress candidate Meenakshi Chandila.

The constituency is also comprised of 46,000 non-Sikh Punjabis, who are considered to be the traditional vote bank of the BJP. Apart from them, the BJP is also banking on 12,000 people from the Bania community and 6,500 Gujaratis by banking on the PM Narendra Modi’s wave. The BJP cand-idate from the area, Man-jinder Singh Sirsa, has alre-ady won from this seat in 2013 and is confident of cli-nching the seat once again.