Nanaji Deshmukh was a social activist and a long-time member of the RSS, who also played a key role in the JP Movement. 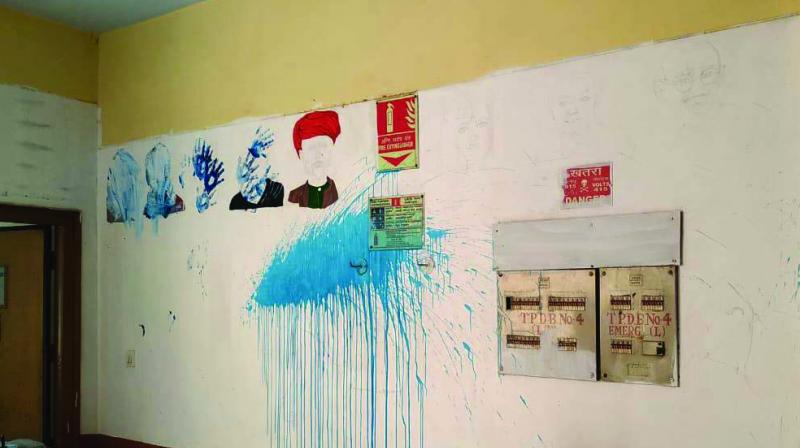 Paintings left incomplete after college students were forced to remove the portrait of Nanaji Deshmukh, a recipient of Bharat Ratna, from the walls of Dr Bhim Rao Ambedkar College in New Delhi on Monday.

New Delhi: A major controversy broke out at Dr Bhim Rao Ambedkar College (Delhi University) in the national capital after a section of students alleged that the varsity staff opposed to their drawing of the portrait of Bharat Ratna awardee Nanaji Deshmukh owing to ideological differences.

The students further alleged that it was a violation of freedom of expression as the administration allegedly forced them to remove the sketch of Nanaji Deshmukh for his affiliation to right wing organisation. The college administration claimed in their reply that the media was creating a mountain out of molehill as the students had themselves removed the said portrait.

Nanji Deshmukh was a social activist and a long-time member of the Rashtriya Swayamsevak Sangh (RSS), who also played a key role in the JP Movement. On January 25, 2019, President Ram Nath Kovind had conferred the Bharat Ratna upon him (posthumously) for his services to the nation.

“We had permission to draw portraits of social activists and also received a fund of Rs 2,500 from the administration for the event. We were making paintings of Nanaji Deshmukh, Bindeshwar Pathak, Saalumarada Thimmakka, Medha Patkar, Jyotiba Phule, Laxmi Narayan Tripathi, Arunima Sinha, and Mahatma Gandhi. However, some of the university staff complained to the college administration and pointed out the portrait of Nanaji Deshmukh in particular and asked us to remove it,” said a student on condition of anonymity.