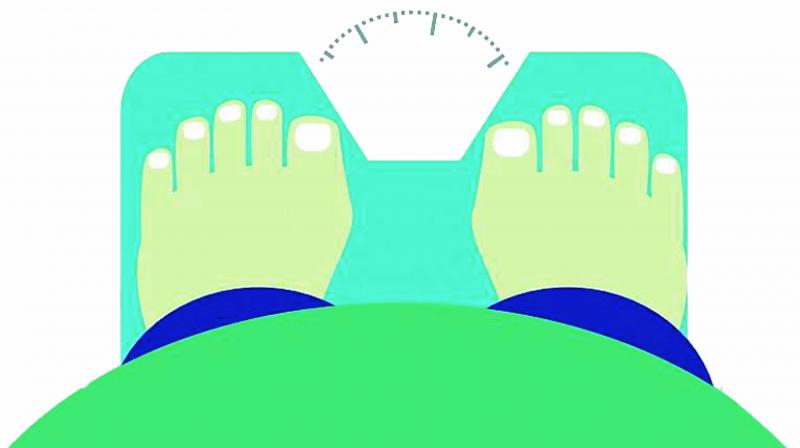 Around 20.1 per cent reported use of tobacco products, while 37.3 per cent had high blood pressure.

New Delhi: Nearly half of a group of healthy individuals living in a Delhi slum were found to be overweight, while 17.2 per cent were obese, according to a recent survey.

Almost 64.9 per cent of 314 individuals, who were assessed during a camp, were found either over-weight or obese, which are risk factors for heart and vascular diseases. Around 20.1 per cent reported use of tobacco products, while 37.3 per cent had high blood pressure.

Around 500 individuals were evaluated and examined for body mass index (BMI), obesity, blood pressure measurement, spot blood sugar, blood lipids and an electrocardiogram (ECG) was done at a recent camp by a team of doctors from Batra Hospital and Medical Research Centre (BHMRC) out of which the data was available for 314 individuals.

"Around 37.3 per cent of the persons had high blood pressure as per the current Indian definition of 140/90 mms Hg. Here it needs to be mentioned that the US definition has changed recently to above 130/80 mms Hg and going by that parameter, it would be an alarming figure of around 50 per cent," said Dr U. Kaul, chairperson and dean academics and research, Batra Hospital and Medical Research Centre.

Analysis of the blood sugar levels taken at the health camp revealed a disturbing pattern, which warrants serious attention from healthcare workers.

ECG performed on them found that 8.9 per cent of them had definite ECG abnormalities indicating a very high probability of a past cardiac event without any history (silent attacks). Minor ECG changes were seen in around 21.5 per cent subjects. "Based upon our analysis we found that taken together, approximately 71 per cent of the subjects had one or more comorbidities contributing to the elevated risk for a cardiac episode in this apparently healthy population," the doctor said.

"The implication of these findings in low income population, many of whom are working as daily wagers and involved in menial jobs, is obvious. This is also an alarm bell as about half of the surveyed population was young (between the ages of 25 to 44 years only)