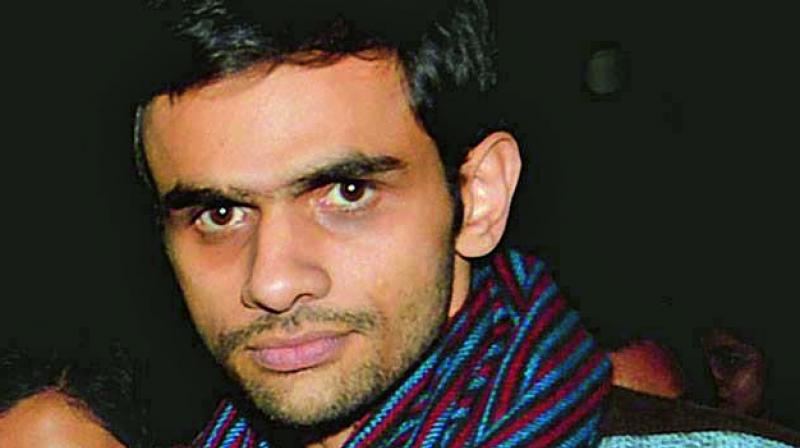 The student leader said that he was informed by Mevani about the threats, and he has not received any call himself till now. (Photo: File)

New Delhi: JNU student leader Umar Khalid has filed a complaint with the Delhi Police that he and Gujarat's Independent MLA Jignesh Mevani had received death threats from a man who identified himself as fugitive gangster Ravi Pujari, a senior official said on June 9.

Filed a complaint with @DelhiPolice regarding Ravi Pujari's death threat to Jignesh and me. He said that I am on his HIT LIST! I have asked for police protection, given the fact that this is the same person who had previously also issued similar threats of killing me in Feb 2016.

On June 8, Khalid approached the police with a complaint over the threats and a case was registered, the police official said, adding that they are investigating the matter.

The student leader said that he was informed by Mevani about the threats, and he has not received any call himself till now.

"Mevani has been receiving death threats for the last two-three days. In one of the calls he received, the caller had mentioned my name too. He had mentioned that if we don't stop giving speeches we would be killed. Mevani informed me and I approached the police. A case has been registered and they said that they will do a threat assessment and take a call on providing police protection," Khalid told PTI.

Mevani too had alleged on Friday that he has received death threats from Pujari. When asked whether the calls were being received in relation to the arrests made by the Pune Police on June 6 in connection with the Bhima-Koregaon violence, he said, "I am not aware about the context. Pujari has not mentioned that he was calling in that context. I don't feel it is a coincidence that the calls (to Mevani) started coming from that day (the arrests were made)."

Elgar Parishad, organised to commemorate 200 years of the Koregaon Bhima battle, was held on December 31 at Shaniwarwada. It was attended by Mevani, Khalid along with Rohit Vemula's mother Radhika Vemula and Bharip Bahujan Mahasangh President Prakash Ambedkar.

In 2016, Khalid's father Syed Qasim Illyas Rasool had filed a police complaint, claiming that he has received a phone call "threatening to kill" his son if he doesn't leave the country. This incident had happened when the police was looking for Khalid in connection with the sedition case filed against him, former JNU students' union president Kanhaiya Kumar, and Anirban Bhattacharya for allegedly organising an event against the hanging of 2001 Parliament attack convict Afzal Guru. Guru was hanged in 2013.