The CCTV cameras are already installed at some places in the hospital and 10 of the marshalls were deployed Monday. 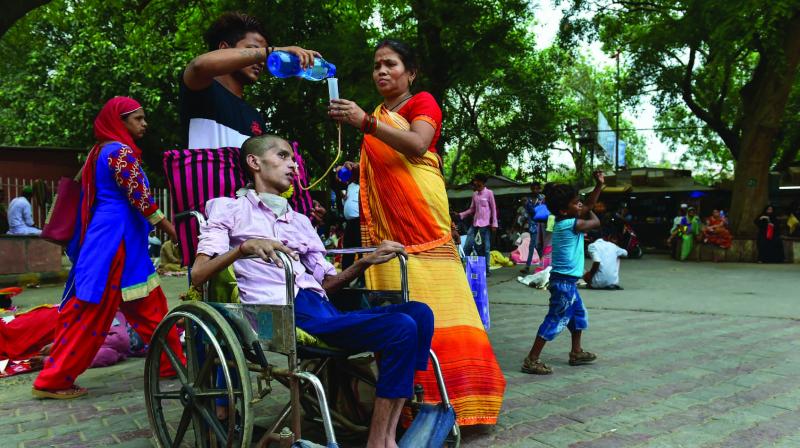 A patient on a wheelchair attended to by his relatives outside the LNJP Hospital in New Delhi on Monday. (Photo: PTI)

NEW DELHI: Patients at the Delhi government-run, LNJP Hospital faced hardship as doctors at the facility went on strike on Monday over an alleged assault on a postgraduate medical student by a patient’s attendant, demanding adequate security. “Resident doctors did not work in both regular and emergency wards,” said Medical superintendent Kishore Singh. The strike was called off in the evening as the government agreed to their demands.

“We have immediately agreed to their demand for deployment of marshalls in the hospital, including in the emergency ward. Other demands like installation of CCTV cameras at other places, we are looking into those aspects, and areas are being identified,” said Delhi health secretary Sanjeev Khirwar.

As many as 48 marshalls will be deployed eventually, 16 in each of the three shifts across the hospital campus, he said. The CCTV cameras are already installed at some places in the hospital and 10 of the marshalls were deployed Monday.

Resident Doctors’ Association (RDA) representatives and hospital authorities had met Delhi health secretary in the afternoon. Earlier in the day, the RDA of the Lok Nayak Jai Prakash Narayan (LNJP) Hospital claimed the stir was triggered by an alleged assault on a third-year postgraduate student of Maulana Azad Medical College, who was on duty last night in the emergency department, around 11 pm.

“A patient was brought to the ER department and later died of some complications. An attendant then assaulted a person on duty, who is a third-year student of MD at the college,” alleged RDA president Saiket Jena. A senior police official said that the hospital authorities have given a statement to them that they do not want to file a police complaint. Dr Jena claimed that the accused person has tendered an apology so they have decided not to pursue the case. “The protesting doctors were demanding adequate security deployment, including marshalls in the emergency department,” the medical superintendent added.

The AIIMS Resident Doctors’ Association (RDA) had urged Delhi chief minister Arvind Kejriwal and the health minister to intervene in the matter and address the security concerns of the doctors. Meanwhile, Delhi health minister Satyendar Jain on Monday said that an act of violence against doctors is condemnable.

“I have directed the health secretary to consider the demands of doctors, whether it is the deployment of marshalls or installation of CCTV in regular wards. Both demands will be in taken care of,” he said. Resident doctors of the AIIMS and the Safdarjung Hospital had also expressed solidarity with their colleagues at the LNJP Hospital.