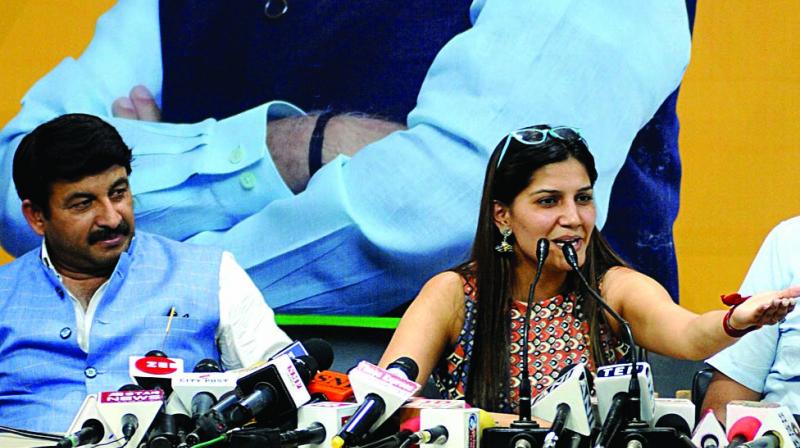 NEW DELHI: A day after joining BJP, Haryanawi folk dancer-singer Sapna Chaudhary on Monday said that she had no interest to contest elections but will do if she was asked by her party.

Addressing her maiden press conference after joining the BJP, Ms Chaudhary said that she did not like AAP supremo and chief minister Arvind Kejriwal. Some BJP and RSS functionaries, meanwhile, have raised eyebrows over the hype given to Ms Chaudhary’s joining of BJP during the launch of the party’s membership drive at an event in JLN stadium.

Mr Chouhan, incharge of BJP’s nationwide membership campaign, was present on the stage where eight persons including Ms Chaudhary joined the party. Mr Tuli sought to classify his tweet saying it was his personal view, without commenting
further.

Ms Chaudhary told reporters that she believed everyone should honour self-respect of others. “You should respect everyone irrespective of whether he is a rickshaw puller or a minister. Everyone has the right to maintain their self-respect,” she said.

When asked if she was interested in contesting Delhi Assembly polls early next year, she said “Not at all. But, I will do exactly what the party asks me to do.”

She said that she would rather quit contest if pitted against Aam Aadmi Party supremo and Delhi chief minister Arvind Kejriwal, in reply to a question.