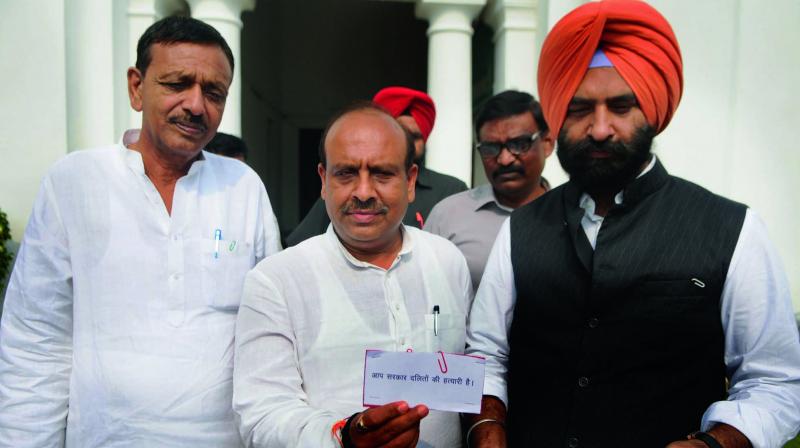 New Delhi: The first day of the four-day Monsoon Session of the Delhi Assembly witnessed stormy scenes as BJP MLAs Manjinder Singh Sirsa and Vijender Gupta were marshalled out of the House after they entered the Well demanding a discussion on the death of four sanitation workers in the city.

The session had a noisy start on Tuesday as the BJP tried to corner the ruling Aam Aadmi Party by raising the issue of sanitation workers while the slogan-shouting AAP members targeted the BJP over the Chandigarh stal-king incident in which the son of Haryana BJP chief is allegedly involved. Amid the din, the Speaker adjourned the House twice — first for 15 minutes and then 30 minutes.

As the House met after the first adjournment, Mr Sirsa and Mr Gupta again came into the Well of the House demanding a discussion on the sanitation issue and refused to return to their seats when asked by Speaker Ram Niwas Goel. The AAP MLAs too followed suit and shouted anti-BJP slogans. The Speaker then adjourned the House for 30 minutes.

The MLAs from both the sides again trooped into the Well when the proceedings resumed. The Speaker then asked the MLAs to go back to their seats. The ruling party MLAs returned, but the BJP legislators refused to budge. The Speaker then asked the marshals to escort Mr Gupta out and he was removed forcibly. Later, Mr Sirsa, too, was removed by the marshals as he continued to protest. The other BJP MLA Jagdish Pradhan returned to his seat.

The BJP has four MLAs in the 70-member Assembly. Its legislator O.P. Sharma was not present as he was earlier suspended for two sessions. Earlier, deputy chief minister Manish Sisodia tried to reply to Mr Gupta over the death of workers, but he could not continue as the House was adjourned. Water minister Rajendra Pal Gautam said that the government is working on new parameters so that there is no such incident in future.

“Under new parameters (to clean sewer), the responsibility of officers and contractors will be fixed. We will ensure that there is no manual cleaning of sewer in the city, but if there is requirement of manual cleaning, a junior engineer will be on the spot. “We are investigating the case. No one will be spared,” Mr Gautam said. Mr Sisodia said that the government will provide job of civil defence volunteers to one family member of sanitation workers who had died in the incident.