While sighting of the bird in Delhi-NCR is common, breeding is rare and uncommon here as it prefers isolated and undisturbed nesting habitat. 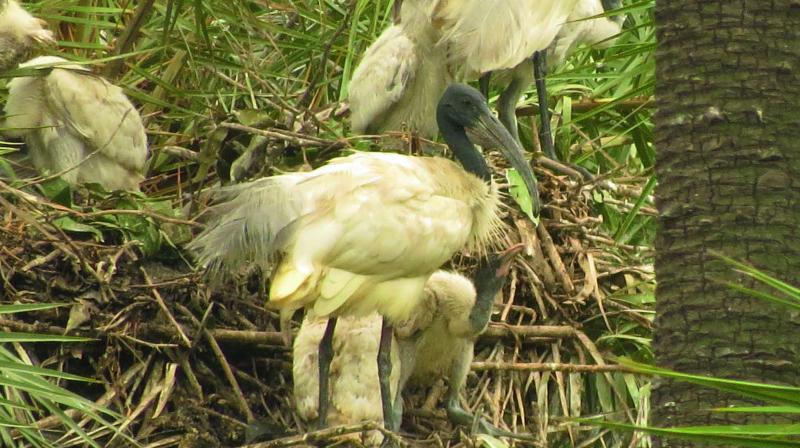 However, around 50 such birds were found nesting at two spots — Sultanpur National Park in Gurgaon and Surajpur Wetland — recently in the region.

New Delhi: The successful breeding of the threatened bird species, “Black-headed Ibis”, during the monsoon season in Delhi-NCR comes as good news for bird watchers and bird-lovers. While sighting this bird in Delhi-NCR is common, breeding is rare and uncommon here, as it prefers isolated and undisturbed nesting habitat. However, around 50 such birds were found nesting at two spots — Sultanpur National Park in Gurgaon  and Surajpur Wetland — recently in the region.

The Black-headed ibis, also known as “Safed Baza” or “Didhar”, is one of the three species of Ibis available mainly in Southeast and South Asia. Its population is declining rapidly and it is enlisted in the IUCN (International Union for Conservation of Nature) Red List under the category of threatened bird species having global population estimation of 15,000 to 30,000 individuals as per the Birdlife International.

“It is not usual for the species to breed here. They need a certain habitat — an isolated place with no human or wildlife interference — like a small island or wetland. So its breeding is very rare in Delhi-NCR,” said TK Roy, an ecologist and conservationist.

He added, “During this monsoon breeding season, I have recorded mixed nesting colony of about 40 Black-headed Ibis on the unusually preferred date-palm groves around Surajpur Wetland in Surajpur Reserve Forest, Greater Noida.” The ecologist said that the species prefer to breed on or around thorny trees such as acacia or “babul”.

“Unfortunately, the Surajpur Wetland doesn’t have thorny trees. It has date palms whose leaves are long. They (Black-headed Ibis) are known to be uncomfortable in this kind of habitat, but surprisingly they were seen breeding on the date palm trees. “This means the species prefers it here. The nesting colonies are also increasing,” he said.

“Since the last few years, it has been recorded that their nesting colonies are expanding. The concerned Uttar Pradesh wildlife department needs to take measures for conservation and protection of their breeding habitat in this reserve,” Mr Roy said.