The minister said that “testing, tracing, isolation and treatment” strategy was still being followed along with “aggressive contact tracing” 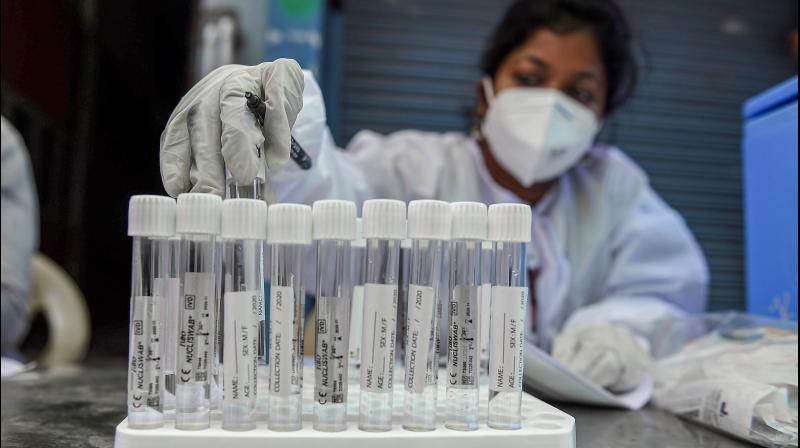 A health worker arranges swab samples on a tray for COVID-19 test at a medical camp. Delhi Health Minister Satyendar Jain said that sharp spike in coronavirus (COVID-19) cases in the national capital will “plateau” after ten days or so. (PTI Photo)

New Delhi: The sharp spike in coronavirus (COVID-19) cases in the national capital will “plateau” after ten days or so, Delhi Health Minister Satyendar Jain has said, and asserted that home isolation policy has proved a “game changer” in taming the surge, a strategy the city government will continue to pursue.

In an interview to PTI, the Minister said there was no need to panic, and added that “the current situation is far better than in June” when the city witnessed a big wave of infections.

“One of the main reasons why we are seeing such a rise in the number of fresh cases is because we are going aggressive as far as testing is concerned. We have been conducting tests in markets, crowded places, mohalla clinics, hospitals, and many other places.

“The scale of testing per day has been almost quadrupled than what was in June,” Jain said, maintaining that Delhi is doing more tests per million people than any other State.

The Minister also asserted that if the city government slows down on the coronavirus testing, it is possible that the number of new cases may come down, but COVID-19 will go on for a long time.

The city had witnessed a massive spike in the number of coronavirus infections in June. Most of the days in the month recorded fresh cases in excess of 2,000 or 3,000. While on June 20, there were 3,630 confirmed cases registered with 77 deaths, on June 23, as many as 3,947 positive cases were recorded in the highest single-day spike in Delhi till date, with 68 fatalities.

However, September registered a sharp surge with as many as 18,778 fresh coronavirus cases reported in the first week alone, including 3,256 COVID-19 on Sunday, the highest single-day spike in 72 days as the city moved towards two lakh-mark with over 4,599 deaths due to COVID-19 so far.

“There is a spike in the number of cases, but the fact is that we have also increased the scale of testing as we don’t want to leave even a single person who has been infected untraced, including asymptomatic ones. This spike will come down in the next 10-15 days, and cases will sort of plateau and stabilise by then,” Mr. Jain asserted.

The Delhi Health Minister emphasised that the “testing, tracing, isolation and treatment” strategy was still being vigorously followed along with the “aggressive contact tracing”.

In June, the Delhi government had taken a number of steps for COVID-19 management, including attaching big, plush hotels to dedicated coronavirus facilities and reserving beds for COVID-19 patients in private hospitals to contain the surge.

Deputy Chief Minister Manish Sisodia in June had estimated that there could be 5.5 lakh coronavirus cases in the city by July 3 and that the city will need 80,000 beds by that month end.

Asked about the most effective strategy of the government that helped contain the spike, Mr. Jain said, “home isolation was our biggest strategy, and it proved a game changer. we are on the right course, and we will continue to pursue that strategy for effective COVID-19 management.”

Delhi government has significantly ramped up testing in the past few days, barring August 31 when over 14,000 tests were conducted and 1,358 fresh cases reported. While on August 30, 14,389 people were tested and 1,358 confirmed cases registered, on September 6 the number of tests was increased to 36,046 and 3,256 positive cases were reported.

As per its home isolation policy, the Delhi government has been monitoring the condition of patients through tele-consultation facilities and also distributed oximetres to help them keep a tab on their oxygen level.

According to official figures, there has been an increase of 80% in the number of home isolation cases of COVID-19 in the national capital between August 21 (5,818) and September 5 (10,514).

On August 3, the number of COVID-19 patients under home isolation, and containment zones count came down to 5,577 and 496 respectively.