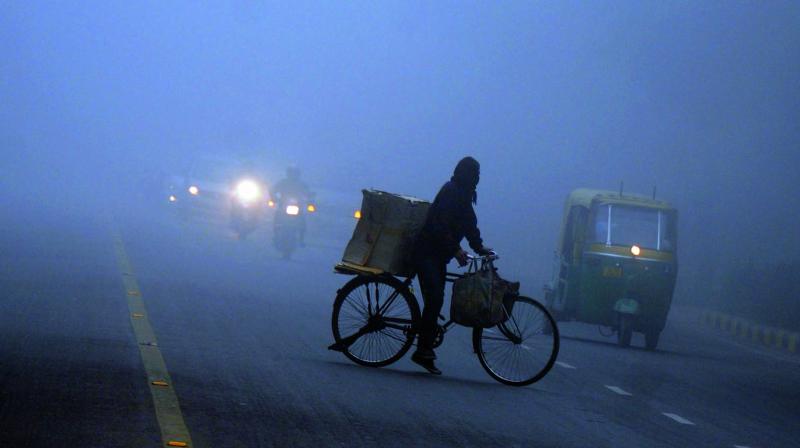 Vehicles are seen with their headlights on during a cold and foggy morning. (Photo: Biplab Banerjee)

New Delhi: Dense fog continued to envelope Delhi on Thursday morning for the second consecutive day with biting chills running down the spine and severely impacting flight operation, railway and road traffic owing to abysmal visibility early morning. The Met department had predicted that the fog is here to stay for few days and the capital will continue to reel under the thick blanket cover.

Meanwhile, road traffic was also affected on Thursday due to dense fog where motorists faced difficulties in reaching offices. “I left for office around 9 am and the visibility was poor. It had become difficult to drive as I could see nothing. As a result, the traffic movement was slow,” said a motorist.

On Wednesday too, the city was engulfed in thick fog, which had led to the delay of at least 81 trains by several hours. Six were cancelled and 51 rescheduled due to dense fog resulting in poor visibility in the national capital.

According to the India Metrological Depar-tment officials, the visibility was recorded at 100 metres at 8.30 am on Thursday morning, which improved to 600 metres at around 11.30 am. At Palam, the visibility was recorded at 350 meters at 8.30 am giving way to clearer skies as the day progressed. The maximum temperature settled at 23.9°C while the minimum temperature was recorded at 8.7°, normal for this time of the year, the Met official said. The humidity oscillated between 97 and 51 per cent.

The areas, which reported dense fog, were Sarai Kale Khan, Rajghat, and Lodhi Road. With over 100 trains being delayed, 41 trains were rescheduled while 11 trains, reported to be cancelled owing to poor visibility on Thursday. It left thousands of passengers stranded at railway stations, said a railway official.

The air quality also dipped due to the presence of moisture and calm wind leaving the air quality “very poor.”  The IMD has predicted showers in the next few daysleading to the mercury sliding to around 5ºC.