Mishra began his fast on Wednesday demanding that AAP leaders disclose the details of funding for their foreign tours. 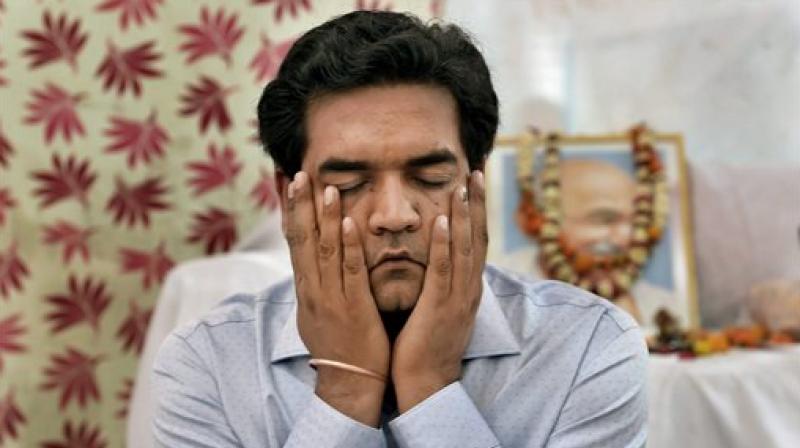 Sacked Delhi minister Kapil Mishra during an indefinite hunger strike at his residence in New Delhi on Wednesday against the alleged misuse of public money to send Delhi Chief Minister Arvind Kejriwal’s close aides on a foreign trip. (Photo: File)

New Delhi: Sacked Aam Aadmi Party (AAP) leader Kapil Mishra, who is on a hunger strike in the national capital, was on Wednesday attacked at the venue of his ‘satyagraha’.

According to NDTV reports, the man was identified as Ankit Bhardwaj, and AAP has alleged that he is from the Bharatiya Janata Party (BJP).

Mishra began his fast on Wednesday demanding that Aam Aadmi Party leaders disclose the details of funding for their foreign tours.

"I'm sitting on a satyagraha till I get clarification on details of international travel expenses of some senior AAP leaders.

"It is not a dharna but a satyagraha. I would like to send a message to Chief Minister Arvind Kejriwal to put out the details of the foreign tours of his five leaders-- Satyendra Jain, Ashish Khetan, Raghav Chaddha, Sanjay Singh and Durgesh Pathak--in public domain," Mishra told reporters.

Mishra was suspended from the AAP after his startling allegation that he witnessed Kejriwal accepting Rs 2 crore in a dodgy transaction.

On Wednesday, he further alleged that details of the foreign trips by AAP leaders would reveal a lot about alleged corruption by them.

On Tuesday, in another letter, Mishra challenged the AAP chief to contest elections against him.

"You are trying to remove me from the Assembly, I challenge you to contest elections against me from any seat. Let's fight the election from my Karawal Nagar seat or even your New Delhi seat. If you believe that people are with you, then I'm ready to resign," Mishra said in the letter.

Mishra has submitted his complaints against Kejriwal and other AAP leaders to the Anti-Corruption Board. On Wednesday, the Central Bureau of Investigation (CBI) said it would examine the charges made by Mishra against Kejriwal.