Kingpin had 25 cases of murder, extortion, robbery against him. 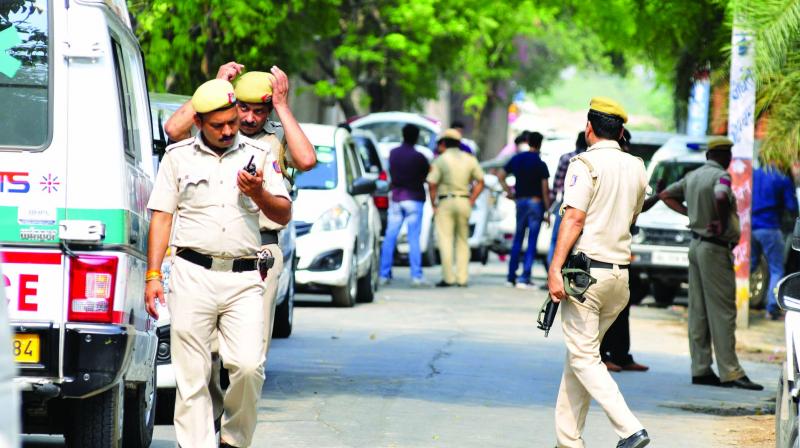 Police personnel and forensic experts inspect the site of an encounter in the Chattarpur area of south Delhi. (Photo: Bunny Smith)

New Delhi: One of Delhi’s most wanted gangsters, Rajesh Bharti, was shot dead in an encounter with the Delhi police in south Delhi’s Chattarpur area on Saturday afternoon. Three members of his gang were also shot dead in the encounter. Eight policemen were also injured during the encounter, said the police.

Bharti had at least 25 cases of murder, extortion, car jacking and robbery against him and he was carrying a reward of Rs 1 lakh for his arrest.

Around 150 rounds were fired by the gangster and the special cell in the shoot-out. Bharti’s associates were identified as Sanjeet Vidroh, Umesh Don and Bhiku. Another criminal, Kapil, who was injured, is undergoing treatment. All of them were involved in several cases of murder and extortion cases in the city.

DCP (special cell) Sanjeev Kumar Yadav said, “The special cell has been tracking the gang for the last two-three months. On Saturday morning, when we received a specific information about their presence at the farmhouse Chandan Hola village in Chhatarpur, the team went to arrest them.”

According to police, the gangsters were about to commit some major offence and were fully armed with deadly firearms in two cars — a Ford Endeavour, bearing a Haryana registration number, and a Hyundai i-20.

Around 1 pm, both the cars were spotted at Kharak-Chandan Hola Road in Chhattarpur area. The team chased them and finally gheroed both the vehicles. They were asked by the police team to surrender, but they started indiscriminately firing at the police personnel, injuring eight policemen. The cops also retaliated in self-defence. About 150 rounds of fire were exchanged.

The police retaliated and four persons were shot dead, while one sustained injuries and was admitted in the AIIMS Trauma Centre. The others managed to escape.

The police recovered illegal semi-automatic pistols from the miscreants.

The gang members had assembled at a farmhouse belonging to one Sanjeev, who is absconding. It is still not clear whether he was accompanying the gang members at the time of the encounter. The seized Ford Endeavour car belongs to him.

The police recovered 40 fake number-plates of vehicles from the Hyundai i-20 car, the ownership of which is yet to established.