Gang used to leave leaflets behind to boast ‘supremacy’

They were a ‘self-styled’ vigilante group and believed that by killing, they were wiping out crime from the society. 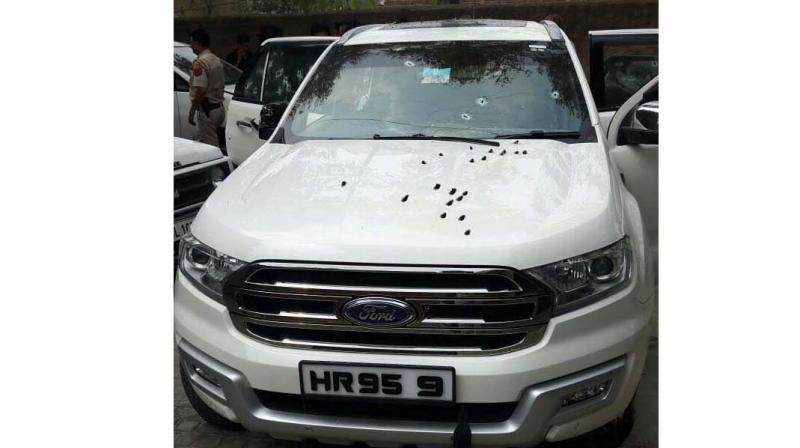 The gang was being tracked by the district police of Dwarka, Southwest, crime branch and special cell.

New Delhi: Thirty-nine-year-old outspoken Rajesh Bharti, who was killed along with three of his associates in an encounter with the Delhi police, had of late started spreading its tentacles in Delhi after being active for a long time in Haryana.

Carrying a bounty of Rs 1 lakh on his head, the gangster had 25 cases of murder, extortion, car-jacking and robbery against him. The other Bharti gang members killed in the encounter have been identified as Vidroh, Umesh Don and Bhiku.

They were a “self-styled” vigilante group and believed that by killing, they were wiping out crime from the society. To establish their identity and supremacy, they used to leave pamphlets at the spot of crime, a police officer said. They were mostly active in border areas of Delhi and Gurgaon.

The gang was being tracked by the district police of Dwarka, Southwest, crime branch and special cell.

In an alleged audio clip, Bharti took pride in saying that they are rulers of the crime world for two decades and even acknowledged the crimes committed by his gang.

He claimed that he possessed an AK-47 assault rifle. In the clip, he was heard extorting Rs 50 lakh from a bookie.

Belonging to a village in Jind, Haryana, Bharti started his ‘career’ as a carjacker. He rose in the ranks quite quickly in Delhi as well as Haryana; he has more than a dozen cases of auto theft filed against him.

His gang gained notoriety as the Kranti gang. In the past one month, the gang had committed many crimes in south Delhi, including lifting two Fortuner SUVs from Vasant Kunj on May 18 and 19.

In July last year, they had killed a man in Dwarka and thrown pamphlets claiming that they are members of Rajesh Bharti gang. Vidroh, who was also killed in the encounter, was wanted in that connection.

Vidroh who was Bharti’s close aide, carried Rs 1 lakh bounty on his head, while Umesh carried a bounty of Rs 50,000. Bharti had escaped along with Vidroh, who was also wanted in several cases, from Haryana police custody 18 months ago.