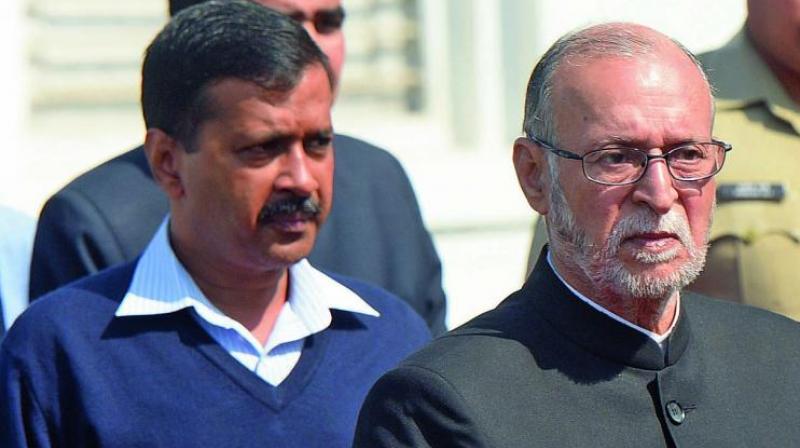 New Delhi: Intensifying the ongoing war of words, Delhi chief minister Arvind Kejriwal, on Monday, said lieutenant-governor (L-G) Anil Baijal was “selective” in accepting the Supreme Court verdict on distribution of power in Delhi. However, the latter dismissed the charge.

Mr Kejriwal wrote to Mr Baijal, wondering how he can be “selective” in accepting the July 4 verdict of the apex court. He urged Mr Baijal to implement the judgment in letter and spirit and asserted that the home ministry does not have the powers to interpret the order.

The chief minister also urged the L-G to approach the Supreme Court immediately to clear any confusion, but advised him to “kindly not violate the order of the apex court.” “Either you should take a position that all the matters now would be placed before a regular bench and therefore you would not implement any part of the order, or you should accept the whole order and implement it. How can you say that you will accept this para of the order but not accept that para of the same order?” Mr Kejriwal wrote in his letter.

Replying to Mr Kejriwal, the L-G said he was quoted “selectively” and charged “erroneously” by the chief minister. Mr Baijal appeared to allege that Mr Kejriwal’s letter was leaked on social and electronic media before it reached his office. “While the entire judgment and its implications are still being studied, it may kindly be noted that in the concluding paras, Hon’ble Court, while answering the reference, has directed to place the matter before the appropriate regular bench. Therefore, further clarity will be achieved when the appeals pending before the regular bench are finally disposed off,” Mr Baijal’s office said quoting his July 6 letter.

In its order, the Supreme Court clipped the L-G’s powers, restricting his jurisdiction to land, police, and public order.

The Centre and the L-G have maintained that a regular Supreme Court bench has to adjudicate over matters, including “services,” and until then status quo has to be maintained. Hours after the July 4 judgment, the Delhi government introduced a new system for transfer and posting of bureaucrats., making the chief minister the approving authority.

However, the services department refused to comply, saying the apex court did not abolish the notification issued in 2016, which made the home ministry the authority for transfers and postings through the L-G.

In his letter on Monday, the L-G reiterated that it would be “premature” to draw conclusions at this stage as appeals are pending before the regular bench of the Supreme Court.