Ashutosh Singh, the state media in-charge for the ABVP said, the ABVP has nothing to do with this incident. 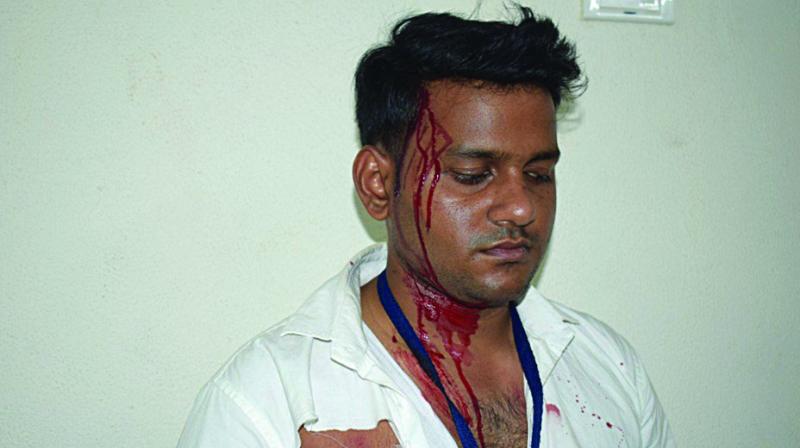 Ankit Bharti has accused ABVP of assaulting him. However, the Akhil Bharatiya Vidyarthi Parishad (ABVP), however, claimed that Mr Bharti was injured in a fight with his own outfit’s candidate for the post of secretary and said it will file a defamation case.

The NSUI said the alleged attack by the “goons of ABVP” happened when Mr Bharti had gone to campaign at the College of Vocational Studies (CVS).

NSUI has released a video wherein, Mr Bharti has said that on Monday morning when he went for campaign at the College of Vocational Studies, some ABVP people hit him, after they try to deny him to enter the college premises. The ABVP thrashed him with belt and also smashed his head.

“He was surrounded by ABVP goons and beaten up with sticks. He was hit on the head. He was taken to RML Hospital for treatment where he received stitches on his head,” said a functionary of the NSUI.

Some students present at CVS said that the attack was “pre-planned”, the NSUI said.

ABVP spokesperson Monika Chaudhary said that ABVP has no role in this matter.

Ashutosh Singh, the state media in-charge for the ABVP said, the ABVP has nothing to do with this incident.

“There was a clash between supporters of NSUI secretary post candidate Ashish Lamba and vice-presidential candidate Ankit Bharti in the College of Vocational Studies in which the latter’s supporters were hurt.

“The ABVP has nothing to do with this incident. It is an attempt by the NSUI to discredit the ABVP due to the popularity of our unit among the students. We will file a defamation case against them.”