Commuters at various stretches face long queues in the city. 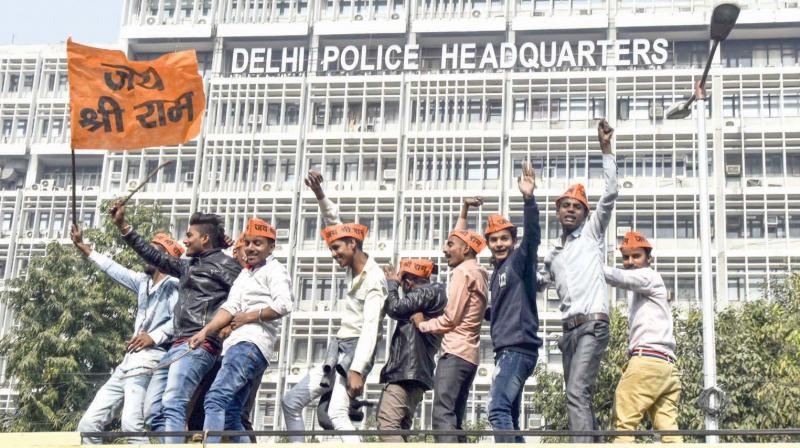 Supporters and members during Vishwa Hindu Parishad's (VHP) event ‘Dharma Sabha’, in which thousands of people gathered to press for the construction of Ram Temple in Ayodhya, days before Parliament’s winter session commences, in New Delhi on Sunday. (Photo: PTI )

New Delhi: Traffic in national capital came to a halt on Sunday due to the “Dharma Sansad” called by VHP at Ramlila Maidan demanding construction of Ram Temple in Ayodhya.

People swarmed at the Ramlila Maidan on Sunday for Vishwa Hindu Parishad’s rally to press for the construction of Ram Temple in Ayodhya, days before Parliament’s winter session commences.

He further said that 53 companies, including 13 outer forces, were deployed to manage the crowd.

Apart from this, around 2,000 traffic police personnel were deployed to avoid inconvenience to commuters.

According to the sources, thousands of people gathered at the rally. However, despite such a huge gathering, the rally ended peacefully without any hassle. Though it  severely affected the road and transport of the national capital.

Commuters at various stretches have to face long queues and bumper to bumper traffic particularly near ITO, Paharganj and Karol Bagh. However the Delhi Traffic police on Saturday issued traffic advisory to avoid certain roads to dodge the traffic.

One of the commuter who was travelling from India Gate C hexagon said, that it was a chaotic situation as it took him almost one and a half hours to reach Laxmi Nagar which otherwise hardly take 20 minutes.

Ahead of the rally, a traffic advisory was issued detailing diversions in Delhi. No traffic would be allowed on Ranjeet Singh Flyover (from Guru Nanak Chowk to Barakhambha Road), JLN Marg (from Rajghat to Delhi Gate), Chaman Lal Marg near VIP gate, the advisory said.