Over 100 students held a protest outside the gate of Gargi College. 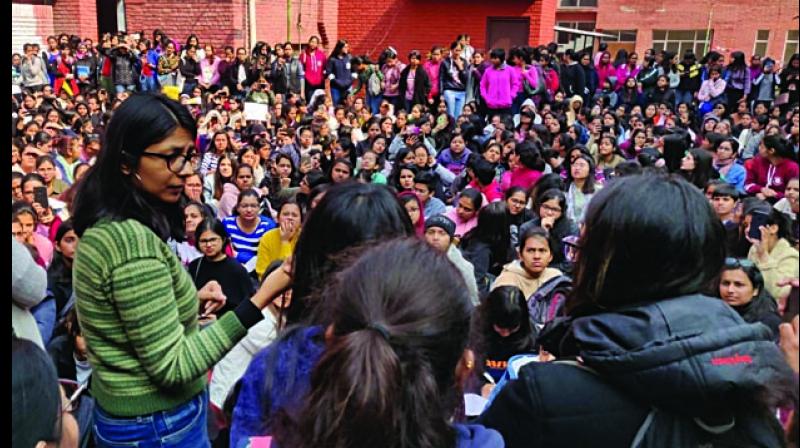 New Delhi: Scores of students of the all-woman Gargi College on Monday held a protest against the alleged molestation of girls by a group of men who had gatecrashed a cultural festival, demanding strict action against the intruders.

The Delhi Police said it has launched a probe into the incident and is scanning CCTV footage to gather evidence.

Police, however, have not received a complaint in this regard, a senior officer said.

The incident came to light after some students took to Instagram to narrate their unpleasant experiences during the February 6 college fest.

Over 100 students held a protest outside the gate of Gargi College.

They alleged that the college management did not take any action even after the students took up the matter with it.

They also alleged that Rapid Action Force and Delhi Police personnel were deployed close to the gate from where the men entered the college, but they did nothing to control the unruly crowd.

“There was a complete lapse of security. The students were groped, molested and even assaulted by the men who appeared to be in their mid-30s. The college had claimed to have made security arrangements. I don’t think such an incident has taken place on any college campus across the country,” a student said on the condition of anonymity.

A political science student, who also did not wish to be named, said, “Some men jumped over the gates, some broke open the gates and some jumped over walls. They were drunk and went berserk.” The men dragged girls and performed obscene acts, Some girls ran towards washrooms, she said.