The former cricketer played a friendly game with the girls. He also shared many light moments during the interaction. 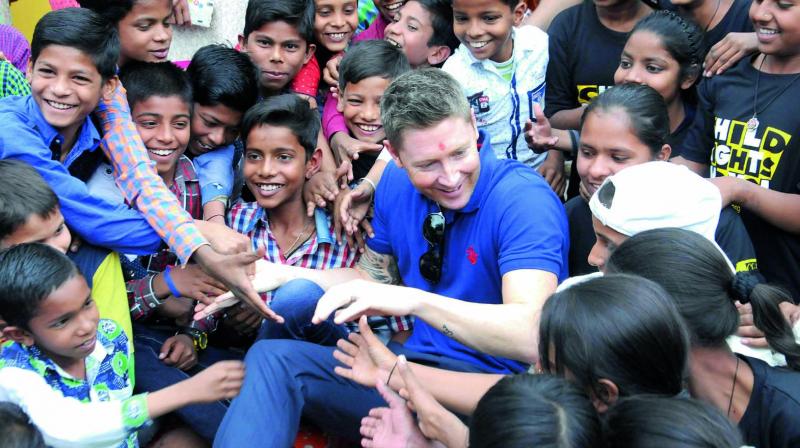 New Delhi: For sixteen-year-old Kavita, who dreams of joining the Indian women’s cricket team someday, it was a dream come true to be in the company of former Australian skipper Michael Clarke.

The former cricketer was invited by the NGO Child Rights and You (CRY) at their project intervention in Kanak Durga slum on Friday to provide a platform to the children to draw inspiration from him.

He met with an excited audience of 50 children, including girls like Kavita from a local cricket team of Shahbad Dairy, brimming with enthusiasm and prepared with questions about the sport.

The questions ranged from what kind of balls he is uncomfortable with, to challenges faced by him in his early life. Clarke emphasised on the importance of education and encouraged the kids to never give up on their dreams.

“What do you think when you are going to bat? Do you think about sixes and fours,” asked a child, to which Clarke replied, “Every time I go there, I think I will hit a century.”

Vatsala Mamgain, the resource mobilisation director of CRY, said: “We have been using sports as a medium of empowering children across our projects, witnessing tremendous transformation. We are overwhelmed to have a cricket star of his calibre meet children from our projects, making them believe that they have the potential to achieve the impossible.”

The former cricketer played a friendly game with the girls. He also shared many light moments during the interaction.

Ms Mamgain told the children that Clarke was leading their team during the 2015 World Cup when India lost the match before the finale. To this the former cricketer remarked amidst peals of laughter, “They (children) are not going to let me out of here.”