The party will stage a similar protest outside Congress headquarters on Akbar Road on the issue on Monday. 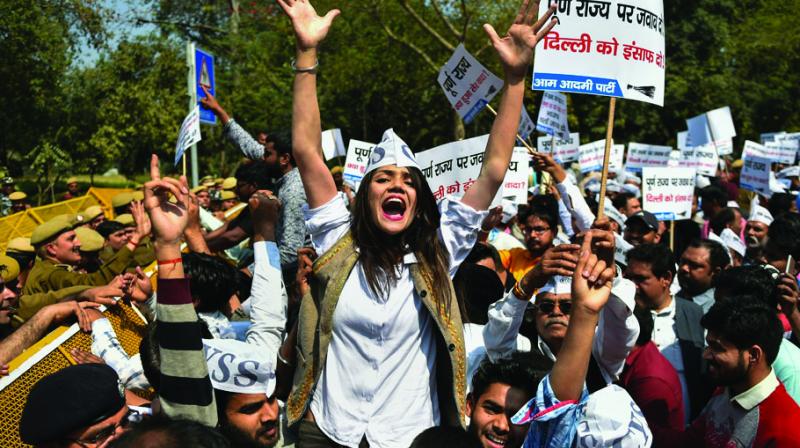 New Delhi: With full statehood as its central theme, the ruling AAP launched its mega campaign for the Lok Sabha polls, to be held on May 12, by staging a major protest near the BJP headquarters in the national capital  over the contentious issue on Sunday.

AAP convener Gopal Rai said that the Lok Sabha election will decide the fate of the country and also of Delhi, which was badly hurt during the “dictatorship” of  the BJP-led dispensation at the Centre.

Before the airstrikes on terrorist camps in Balakot in Pakistan, chief minister Arvind Kejriwal had even threatened to go on an indefinite hunger strike to press for his demand for grant of full statehood to Delhi. But in the aftermath of the air strikes, Mr Kejriwal had postponed his hunger strike.

On Sunday, a large number of AAP volunteers and its frontal organisations protested near BJP headquarters on the Deen Dayal Upadhyaya Marg, demanding the party to clear its stand on full statehood to Delhi.

The party will stage a similar protest outside Congress headquarters on Akbar Road on the issue on Monday.

Mr Rai said the people of Delhi were eagerly awaiting the announcement of the Lok Sabha election dates, and added it will give them relief from the “autocracy” of the Modi government and its policies.

The party has designed a three-tier campaign in the first phase of which 1,000 teams will go door-to-door, covering seven Lok Sabha constituencies divided into 560 zones.