The police stopped the protesters from reaching the All-India Congress Committee (AICC) headquarters in Akbar Road. 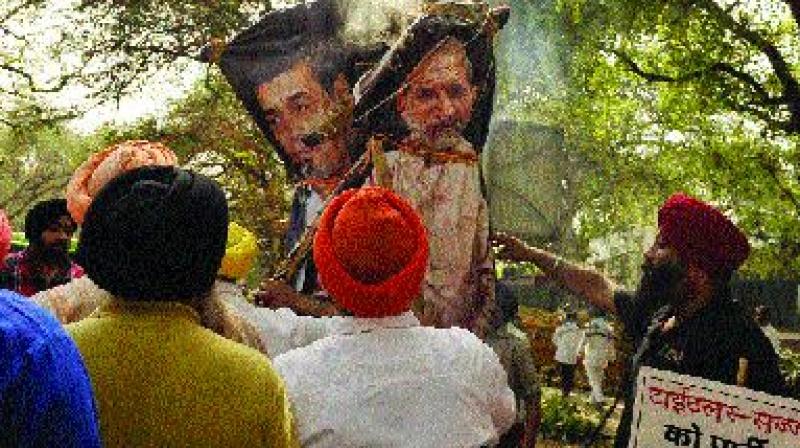 Akalis burn effigies of Sajjan Kumar and Jagdish Tytler during a protest against 1984 anti-Sikh riots outside the Congress head office in New Delhi on Tuesday. (Pritam Bandyopadhyay)

New Delhi: Members of Sikh groups staged a protest on Tuesday near the Congress headquarters, demanding the removal of Sajjan Kumar and Jagdish Tytler from the party for their alleged role in the 1984 anti-Sikh riots.

The police stopped the protesters from reaching the All-India Congress Committee (AICC) headquarters in Akbar Road. The protesters raised slogans and scaled barricades even as the police tried to push them back. It detained Delhi Akali Dal president Manjeet Singh during the protests by Sikh groups outside the Congress office on Tuesday.

“We are demanding that Congress chief Rahul Gandhi remove Kumar and Tytler from the party for their role in the anti-Sikh riots,” said Manjin-der Singh Sirsa, general secretary of the Delhi Sikh Gurudwara Manage-ment Committee and a BJP MLA.

“The Congress should now clear its stand over Kumar and Tytler, who are accused in the anti-Sikh riots and were present at the party’s hunger strike at Rajghat on Monday,” Mr Sirsa added.

On 5 April, the Akali Dal had said that they have a sting operation incriminating Mr Tytler in the 1984 anti-Sikh riots case.

On 9 April, Mr Tytler was allegedly told by Delhi Congress chief Ajay Maken to leave the venue minutes after he was found sitting on the dais at Delhi’s Rajghat.

Mr Tytler, however, denied the reports saying he “was not told to leave”.