People tried to keep themselves hydrated and took precaution to remain indoor or in shade as the Sun rained fire from the sky. 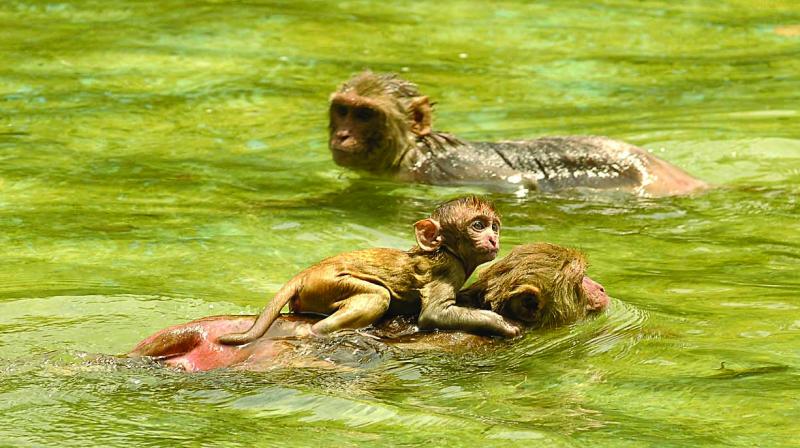 Monkeys enjoying in a waterbody near India Gate in New Delhi on Monday. (Photo: Pritam Bandyopadhyay)

New Delhi: The nation witnessed the hottest day of all times with the mercury rising as high as 48°C in Palam on Monday.

Hot dry winds—loo—swept the city, compounding the woes of people who had to venture out for work.

People tried to keep themselves hydrated and took precaution to remain indoor or in shade as the Sun rained fire from the sky.

According to the India meteorological department (IMD), in large areas a heatwave is declared when the mercury touches the 45°C mark for two consecutive days and a severe heatwave is when the temperature soars to 47°C for two days on the trot.

In small areas, like the national capital, a heatwave is declared if the maximum temperature is recorded at 45°C even for a day, it said.

Some relief is expected only after Tuesday night. The India Meteorological Office has predicted thunderstorm with “gusty winds.”

“We issued a red alert this morning for Delhi. People can expect some decline in temperature only from June 12,” IMD scientist Devendra Pradhan told the media.

Temperature of 48°C and above has been mostly recorded in Rajasthan this summer. Churu has been the hottest place for days.

Exactly a week ago, 11 of the 15 hottest places in the world were in India while the rest were in neighbouring Pakistan, weather monitoring website El Dorado reported.

The pattern of frequent heatwaves in the country is part of the climate change that is making itself felt across the globe.

Last year was the sixth warmest since 1901, when preserving weather records started in the country. Since 2004, the country has experienced 11 of the 15 warmest years.